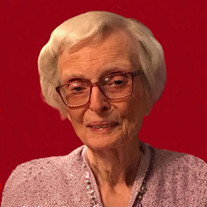 Eleanor S. Woody Shannon- Eleanor Shannon Woody passed away after 101 years dedicated to the service of others on April 28, 2022. Born on August 18, 1920, to farmers William Everett Shannon and Lily Abernethy Shannon, Eleanor was a wife, mother, and teacher whose heart was truly set on the Lord. She gained her Bachelor’s of Science Degree at Blue Mountain College, then in 1949, she married Walter W. Woody Sr. and the two began their lives together. Eleanor temporarily stopped teaching to raise her children, but following her husband’s death in 1966, she went back to teaching. She taught at Belden High School for several years, then rounded out her career at Shannon High School. Before her retirement in 1986, Eleanor gained two additional degrees in education from Mississippi State University and touched countless students’ lives. Eleanor, Nana to so many, extended her talents for teaching to her church and led Discipleship Training at Shannon First Baptist Church until she was 99 years old. She was also heavily involved in the Shannon Senior Women’s Club, of which she served as President. In her free time, Eleanor enjoyed reading, traveling, painting, and spending time with her family. Eleanor’s house was oft described as more book than baseboard, and she fostered a life-long love for learning that inspired all around her. Her compassion and loving spirit live on despite her physical passing, as evidenced by 6 of her descendants currently working as public servants. Eleanor is survived by her two children, Anne Whitehead and her husband, Eugene of Tupelo, and Dr. Walter W. Woody, Jr. and his wife, Jan of Tupelo; four grandchildren, Melissa Perkins and her husband, Vance of Tupelo, Amanda Tennison and her husband, Casey of Saltillo, Kelli Stewart and her husband, Jeb of Macon, and Michael Woody of St. Catharines, Ontario, Canada; six great-grandchildren, Will Perkins and his wife, Ansley, Eleanor Perkins, Bryant Perkins, Parker Tennison, Eli Stewart, and Ivy Kate Stewart; one sister-in-law, Dorothy Shannon; and one sister-in-Christ, Gloria Bogan. She was preceded in death by her husband; parents; grandson, Jeffrey Grisham; brother, Paul Shannon; and two infant siblings. Visitation will be 4 until 7 p.m. Friday, April 29, 2022, at W. E. Pegues, Tupelo. Services honoring Eleanor’s life will be 2 p.m. Saturday, April 30, 2022, at Shannon First Baptist Church with Bro. John Davis officiating. Graveside services will follow at Shannon Cemetery. W. E. Pegues Funeral Directors is in charge of the arrangements. Pallbearers will be Mike Robinson, Paul Hendrix, Danny Simmons, Mike Filgo, Samuel Hathorn, and Michael Hathorn. Honorary pallbearers will be Mike Witthauer and John Walser. Expressions of sympathy and fond memories may be made at www.peguesfuneralhome.com.

Eleanor S. Woody Shannon- Eleanor Shannon Woody passed away after 101 years dedicated to the service of others on April 28, 2022. Born on August 18, 1920, to farmers William Everett Shannon and Lily Abernethy Shannon, Eleanor was a wife, mother,... View Obituary & Service Information

The family of Eleanor S. Woody created this Life Tributes page to make it easy to share your memories.

Send flowers to the Woody family.