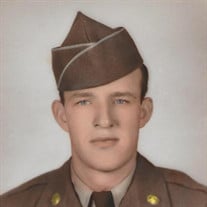 Edward H. Randall, Sr. Tupelo- Edward Herman Randall, Sr died Monday, November 8, 2021, at North Mississippi Medical Center. Born on October 6, 1931, Edward is the son of William Herman Randall and Amelia Taylor Randall. On April 14, 1961, he married Clara Floyd Randall, they spent 39 years together before her death in 2000. Serving his country honorably in the United States Army, Edward was enlisted from 1952 until 1954 and continued his service in the Army Reserves until 1960. After his service, he became a member of the American Legion. Edward had a 43-year career in automobile mechanics with 35 of those years at Tupelo Auto Sales where he retired in 1996. He was a well-known accomplished mechanic. Edward had an outspoken personality and was adored by many. Edward had an inquisitive mind teaching himself how to play guitar as a young man. He enjoyed riding his motorcycle in his younger years as a hobby and later in his life riding his lawnmower. He could always be found tinkering on appliances, computers, and cars. Although 90 years old, he was very tech-savvy, he loved gadgets and spending time on FaceBook. He was a man of faith, always reading and studying the Bible, his current membership was at Beech Springs Free Will Baptist Church. Edward leaves behind two children, Eddie Randall and his wife, Alice of Tupelo; Harriet Randall of Nettleton; six grandchildren, Brandon Randall, Zachary Randall of his wife, Kim, Grady Randall, Tre’ Holt, Wesley Holt, and C. J. Barkley; one great-grandson, Landon Randall. He was preceded in death by his parents; wife, Clara Randall; daughter, Donna Randall; sisters, Corene Smith, Lucille Baskins, Jewel Worthey; brother, Hershel Taylor. Visitation will be 4 until 7 p.m. Thursday, November 11, 2021, and 12 p.m. until service time Friday, November 12, 2021, at W. E. Pegues, Tupelo. Services with Military Honors will be 2 p.m. Friday, November 12, 2021, at the Jefferson Street Chapel of W. E. Pegues with Bro. Dennis Kizzire officiating. Burial will follow in Lee Memorial Park. Memorials may be made to Beech Springs Free Will Baptist Church, 146 County Road 1702, Saltillo, MS 38866. Expressions of sympathy and fond memories may be left at www.peguesfuneralhome.com.

The family of Edward H. Randall, Sr. created this Life Tributes page to make it easy to share your memories.