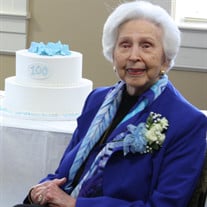 Collierville, Tenn.-Edith Johnson Gurner, lovingly known to her grandchildren, family and friends as Amma, went home to be with Jesus on Sunday, January 10, 2021 peacefully at home with her family by her side just a few weeks shy of her 104th birthday. Edith was born in Verona, Mississippi on March 14, 1917, to Rosebud Thomas and William Washington Johnson and was raised in Tupelo with her parents, sister Kate Cooper Lanier, and brother Roman Johnson. While a teenager in Tupelo, she survived the second deadliest tornado in US history, the Tupelo-Gainesville tornado of 1936. The tornado demolished the family home on Main Street in Tupelo. After high school graduation, Edith attended the University of Mississippi in Oxford and then went to school in Jackson, Mississippi where she met her husband, Lewis Boston “Hicks” Gurner. They married in 1937 and raised three children, Gail Gurner Tyler (Benny), Glenda Gurner Holbrook (Roger) and William L. “Bill” Gurner (Beth). In addition to her children, Edith is survived by six grandchildren, their spouses and 17 great grandchildren. On her 100th birthday in March, 2017, Edith was honored by the State of Tennessee with the Centenarian Award which was presented to her in a special ceremony arranged by the Town of Collierville and the Collierville Burch Library, where Edith was known for being such an avid reader. She was given the award by Senator Mark Norris, Collierville Mayor Stan Joyner and the Collierville Board of Aldermen. The town of Collierville sent the town’s double decker bus to her home to drive through town to the ceremony at the library. In her words it was “big doings.” The following day, she was given a party by her family that was attended by a large crowd of well-wishers including a proclamation delivered by a representative from the city of Verona, Mississippi. Edith was dearly loved, the life of the party, the matriarch of her family, protective, loving, and always curious about what was going on in the lives of her friends and family. She did not miss a beat. She was an active member at her church, Second Baptist Church on Walnut Grove for many years, serving on committees until her 90’s. She drove until she was 100. She also attended Grace Evangelical Church in Germantown with her son and daughter-in-law whom she lived and was cared for many years. Edith was a member of the Grace Evan’s Loving Stitches group, a knitting and crocheting women’s missions ministry. She loved being part of this group and the people in it. Edith is in heaven with her husband, parents, sister, brother, her sons-in-law Benny Tyler and Roger Holbrook and her dear friends that preceded her. In the words of her favorite hymn, Amma, we will meet you again on those beautiful shores in the sweet by and by. Due to Covid restrictions the family will have a private graveside service in Verona, Mississippi. In remembrance of Edith’s life, the family asks that memorial be made to Grace Evangelical Church Grace Venture Fund, 9750 Wolf River Blvd, Germantown, TN 38139 or St. Jude Children’s Hospital, PO Box 50, Memphis, TN 38101.

Collierville, Tenn.-Edith Johnson Gurner, lovingly known to her grandchildren, family and friends as Amma, went home to be with Jesus on Sunday, January 10, 2021 peacefully at home with her family by her side just a few weeks shy of her 104th... View Obituary & Service Information

The family of Edith Johnson Gurner created this Life Tributes page to make it easy to share your memories.

Send flowers to the Gurner family.