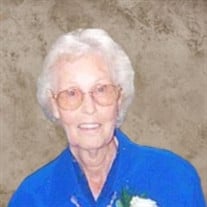 EARLENE ROEBUCK GRISSOM   Murfreesboro, Tenn. formerly of Tupelo - Earlene Roebuck Grissom was born on May 2, 1919 and entered Heaven's Gates on November 16th, 2017 at 98 years of age.   Services will be 1 p.m. Saturday, November 25, 2017 at the Jefferson Street Chapel of W. E. Pegues with visitation from noon until service time. Graveside services will follow in Tupelo Memorial Park. The service will be live streamed and recorded for those who may not be able to attend at www.peguesfuneralhome.com. Pallbearers will include her great-grandsons, Robert Cleland Monaghan, II, Arron Wesley Monaghan, and Robert Blake Dellinger and nephews, Kenneth Lambert, Gaither Roebuck, Michael Roebuck and Matt Covey.   Earlene passed away peacefully at her home in Murfreesboro, Tennessee with a family member at her side. She was the daughter of Matthew and Erin Roebuck of Wayne County, Miss. and was united in marriage to Audie Cleland Grissom on August 16, 1941 in New Albany, Miss. He preceded her in death June 4, 1963. She was also preceded in death by three brothers and five sisters. She is survived by her daughters, Janice Smith (Ronnie) of Brentwood, Tennessee and Linda Holland (Bill) of Readyville, Tennessee; six loving grandchildren, Robert Cleland Monaghan Sr. (Tammy), Sulynn Dellinger, Ashley Holland, Lana Smith, Kimberley Smith, and Krista Ramsey (Reggie); four great-grandchildren who were the apples of her eye, Robert Cleland Monaghan, II (Courtney), Arron Wesley Monaghan, Robert Blake Dellinger and Caroline Ramsey; and two great-great-grandsons, Truett and Neyland. She is also survived by a sister, Ruby Lois Lambert of Jacksonville, Florida and many loving nieces and nephews.   Earlene learned the value of hard work at a young age, picking cotton on the family farm in Mississippi. She worked as a beauty operator near army bases where the family was stationed and became an entrepreneur when the family settled in Tupelo. There she opened and operated "Earlene's Beauty Shop" adjacent to her home. In 1968, she applied and was approved to open and own/operate a new Hancock Fabrics store in Columbia, Tennessee. She subsequently operated stores in Tallahassee, Florida and Bowling Green, Kentucky before retiring to Murfreesboro at the age of 66.   In her retirement years, Earlene spent much of her time planting and tending a large backyard garden of fresh vegetables and a huge collection of flowers around her home. The nearby police officers used her home as a reference point because no one could miss noticing the house with all the beautiful flowers in the yard.   Earlene had a strong faith in God and a long prayer list she lifted up to Him each night. Family came first with her and her home was the annual Thanksgiving destination for many years. Jigsaw puzzles, Rook cards and toys for the little ones were always enjoyed. Her grandchildren, greats and great-greats were her pride and joy, and she worked hard to pass on the values of hard work and a good reputation to them.   For the last few years, several nurses and sitters helped to provide home care for her, and the family wishes to express their sincere thanks. Her doctors and their teams were wonderful as things changed with her eyes, ears, and all that comes with aging. Her mind stayed sharp, and she had high expectations, sometimes reminding them to "put your smart hat on and figure this out".  The family is extremely grateful to those doctors and their teams. She was also fortunate to have good neighbors who visited, cheered and helped and are much appreciated by the family.   Flowers or donations to the JDRF Diabetes Foundation (JDRF.org) would be welcomed.   Expressions of sympathy may be left at www.peguesfuneralhome.com.

The family of Earlene R. Grissom created this Life Tributes page to make it easy to share your memories.

Send flowers to the Grissom family.