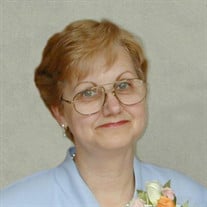 Diann Priddy Avon, Ohio formerly of Tupelo, Mississippi- Diann Doris Priddy went to be with the Lord on Thursday, February 18, 2021, following a battle with multiple illnesses. At the time of her passing, she was a resident of The Woods on French Creek nursing home in Avon, Ohio, where she lived near her son, daughter-in-law, and her three grandchildren. Diann was born in Merrill, Wisconsin, the youngest of four children to Percy Roger Kleinschmidt and Dora Minnie Albertina Kleinschmidt (Hinz). She was married to her husband, James Franklin Priddy Sr., from 1965 until his passing in 1994. A long-time resident of Tupelo, Diann worked as a retail sales associate for several local businesses over the years including Black’s Clothing and Wal-Mart, as well as being a licensed secretary at Robert Helm’s Allstate. She was an active member of First Methodist Church of Verona with her family, and later was an active member of Verona First Baptist where she ministered to others through her prayers, sending cards, and encouragement. Diann is survived by her son, James Franklin Priddy Jr.; daughter-in-law, Paula Eaker Priddy; grandchildren, T.J., Darcy and Jared Priddy all of Avon, Ohio; and brother, Elroy Kleinschmidt and his wife, Ruth of Belgium, Wisconsin. She is also survived by many nieces and nephews on both the Priddy and Kleinschmidt sides of the family. She was preceded in death by her parents; her husband; sister, Phyllis Porath; and brother, Percy Kleinschmidt. Graveside services honoring Diann’s life will be held 11 a.m. Saturday, February 27, 2021at Andrews Chapel Cemetery in Mooreville. Due to COVID considerations, there will be no indoor services but family and friends are welcome to attend the service or pay their respects following the burial. W. E. Pegues Funeral Directors is in charge of the arrangements. Memorial may be made to The Anchor Church, 278 College Street, Verona, MS 38879 or Cure Alzheimer’s Fund, 34 Washington Street, Suite 310, Wellesley Hills, MA 02481. Expressions of sympathy may be left at www.peguesfuneralhome.com.

Diann Priddy Avon, Ohio formerly of Tupelo, Mississippi- Diann Doris Priddy went to be with the Lord on Thursday, February 18, 2021, following a battle with multiple illnesses. At the time of her passing, she was a resident of The Woods on... View Obituary & Service Information

The family of Diann Priddy created this Life Tributes page to make it easy to share your memories.

Send flowers to the Priddy family.