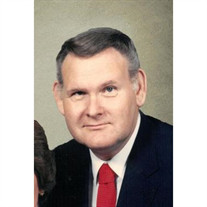 Danny D. Boyd Belden - Danny D. Boyd, 75, went home to be with his Lord and Savior Monday, May 22, 2017, at Mississippi State Veterans Home in Oxford. He was born May 18, 1942, to Leonard Franklin and Opal McMillen Boyd. Danny graduated in the 1960 class of Belden High School and had also attended Mississippi State University. During High School, Danny worked at Gene Sullivan's Store in Belden. During the Vietnam War, he served his country in the U. S. Army in Germany. On December 22, 1968, Danny married Linda Thomas and they resided their entire marriage in the Belden area. Danny retired from Tupelo Hardware in 2007. Prior to that, he had worked at Hunter Sadler and Hayes Construction. Until his illness, Danny was an active member of Belden Baptist Church and served as a Deacon, sang in the choir, coached youth basketball, and lead youth discipleship training. He also had served as Sunday School Director as well as nearly all the various committees of the church. Survivors include son, Michael Boyd of Hattiesburg; one sister, Doris Page (Jerry) of Belden; a special niece, Toni Page. Danny was head of a large extended family which also included a host of friends. He was preceded in death by his parents and his wife, Linda Thomas Boyd who died in March of 2003. Visitation will be from 5 pm until 7 p.m. Tuesday, May 23, 2017, at W. E. Pegues in Tupelo.Services will be 1 p.m. Wednesday, May 24, 2017, at The Jefferson Street Chapel of W. E. Pegues with Rev. Jim Holcomb officiating. Burial will be in Belden Cemetery.Honorary pallbearers will be Ken McNutt, Mike Comer, Casey Turner, Greg Hopkins, Matt Williams and Chad Hutchison. Expressions of sympathy may be left at www.peguesfuneralhome.com.

Danny D. Boyd Belden - Danny D. Boyd, 75, went home to be with his Lord and Savior Monday, May 22, 2017, at Mississippi State Veterans Home in Oxford. He was born May 18, 1942, to Leonard Franklin and Opal McMillen Boyd. Danny graduated in... View Obituary & Service Information

The family of Danny D. Boyd created this Life Tributes page to make it easy to share your memories.

Send flowers to the Boyd family.