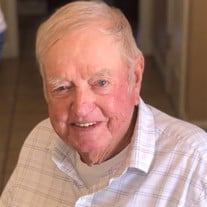 Shannon—Daniel Clovis “Dan” Herndon, 91, passed away Saturday, November 7, 2020 at his home. He was born February 24, 1929, the son of C.A. and Verna Gann Herndon. Dan worked as an electrician, traveling all over the country for many years. A member of the “Greatest Generation”, he proudly served his country in the United States Army during World II. Dan was a true outdoorsman, raising cattle and horses, and farming. He also enjoyed hunting. Dan leaves behind his wife, Jean Westmoreland Herndon of Shannon; his son, Ronald Herndon of Shannon; two granddaughters, Brooke Corbett Gonzalez and Blair Corbett, both of Saltillo; three great-grandchildren, Baylee Arnold, Georgia Blair Nanney, and Jack Riley Williams; a sister, Nita Patterson of Blue Springs; and two step-children, Donald Westmoreland and Debbie Sloan, both of Shannon. He was preceded in death by his parents; his first wife, Mavis Adelia Herndon; his daughter, Teresa Herndon; and a brother, James Lee Herndon. Services will be 2 p.m. Monday, November 9, 2020 at the Jefferson Street Chapel of W. E. Pegues with Rev. Greg Herndon officiating. Burial will be in Shannon Cemetery. Visitation will be 1 p.m. until service time Monday at W.E. Pegues, Tupelo. Expressions of sympathy may be left at www.peguesfuneralhome.com.

The family of Dan Herndon created this Life Tributes page to make it easy to share your memories.

Send flowers to the Herndon family.