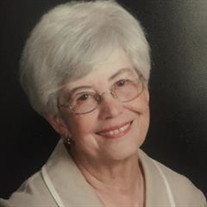 TUPELO --Costa Homan Hill, age 82 passed away on October 10th after a brief illness. A native of Shannon, MS, she was born February 24, 1938 to James Herman Homan and Dot Buskirk Homan. She was a 1955 graduate of Shannon high school, and later attended the University of Mississippi. In July of 1960, she married Richard “Dick” Hill. They were married 59 years, when Dick pre-deceased her in March, 2019. Costa was a Tupelo business woman; she worked as a bookkeeper for Siesta Furniture Manufacturing. After marrying, she continued working as a bookkeeper at the family businesses, Hill’s Western Auto and later Hill’s Marine and Outdoor Sports. Costa was an avid Ole Miss Rebel fan with season tickets for football and basketball, always hosting tailgates for family and friends. She was a caring wife, loving mother, a true and loyal friend to many, and a devoted servant, giving of herself endless hours to serve to her community and others. Costa was described as “a friend to the friendless”. She was a member of Shannon United Methodist Church and later in life a member of First United Methodist Church in Tupelo. She was active member participating in the Church Circle, Helping Hands, a greeter, Alter Guild, Disciple Bible Studies and also helped in kitchen cooking Wednesday night meals. Costa was very active in her community and she had a true servant’s heart toward serving others. She was a Cub Scout Den Mother and the Girl Scout Leader of the first integrated Girl Scout group from Brownie to graduating her girls as Senior First Class Girl Scouts. She was an officer and a Life Member of the Tupelo Junior Auxiliary, specifically volunteering at North Miss Medical Center and Trace Way Retirement Community; Celebration Village, Sanctuary Hospice Home; and the Sanctuary Village Shoppe. Costa was also a Member of the Salvation Army Women’s Auxiliary, helping prepare Thanksgiving meals for a 1000 people; an Angel Tree and Meals on Wheels volunteer; Co-Chair for Salvation Army’s Warehouse clearance and Co-Chair for Empty Bowls in 2006. Costa loved her family, her friends and her church family. She was the glue that kept us all together. Her home was always open for her nieces, nephews and her children’s friends, who she loved like her own. There were always extra kids spending the night or staying for dinner. She loved children and always wanted a house full. She is survived by her daughter, Holly Hill Crowder (Richard) of Madison; son, Chris Hill (Blake) of Oxford; five grandchildren, Hardin Crowder (Julianna) of Vicksburg, Pierson Crowder of Cincinnati, Ohio, Addison Crowder of Memphis, Margaret Hill and Arden Hill of Oxford; brothers, Herman Homan Jr. of Shannon and David Homan of Fulton, and sister, Jo Ann Homan Montgomery, of Dorsey. She was preceded in death by her parents, Herman Homan and Dot Buskirk Homan. Services honoring her life will be 11 a.m. Tuesday, October 13, 2020 at First United Methodist Church. Visitation will be 9 a.m. until service time at the church. Burial will be in Pontocola Cemetery. Church protocols will be observed. W.E. Pegues Funeral Directors is entrusted with the arrangements. Pallbearers will be her nephews, Mark Montgomery, Shane Homan, Jim Homan, Ty Hill, Patrick Homan, Michael Montgomery, and honorary pallbearers Clay Hill and Brent James. In lieu of flowers, memorials may be made to Salvation Army. Expressions of sympathy may be left at www.peguesfuneralhome.com.

TUPELO --Costa Homan Hill, age 82 passed away on October 10th after a brief illness. A native of Shannon, MS, she was born February 24, 1938 to James Herman Homan and Dot Buskirk Homan. She was a 1955 graduate of Shannon high school, and later... View Obituary & Service Information

The family of Costa Homan Hill created this Life Tributes page to make it easy to share your memories.

Send flowers to the Hill family.