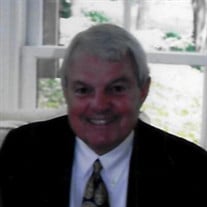 Tupelo – Cooper Prude died Wednesday, April 28, 2021, at Sanctuary Hospice House. After several years of disappointment that his heart disease, metastatic cancer, and Alzheimer’s disease were too much for his once strong body and quick mind to overcome, the Lord called Home His son and he is now at peace. Born on September 6, 1936, in Tupelo, Mississippi, to Grace Cooper Prude and Joseph Leslie Prude, Cooper had a deep love for this region of the country. Following a long business career that moved him and his family around the Southeast and Midwest, Cooper returned to Tupelo to start his “third chapter” in the early 2000’s. Cooper attended Milam Elementary, Tupelo, until he moved to Dunedin, Florida, with his mother and new stepfather, Alf E. Birge. He loved the beach and flourished in school. He played junior high and high school sports including football and basketball, was an avid swimmer, and loved to run. He was recognized state-wide for his prowess on the football field when he was a senior. Cooper graduated from Clearwater High School in 1954. As a college student at Carson-Newman University, Jefferson City, Tennessee, he served on the Intramural Sports Committee, eventually as chairman, on the Baptist Student Union Board all four years, eventually as Vice-President, President, and then BSA Tennessee State President during his senior year. During college, Cooper felt led to three very different careers. Was he called to continue his leadership in Baptist Ministry? Or was he to pursue a dream of becoming an attorney? Or was a career in business his destiny? After talking with mentors, friends, and of course family, he decided on law school at Vanderbilt following his graduation from CNU in 1958. Then, just shy of taking the bar exam, he accepted a job at Honeywell in Clearwater. He and his brand-new wife, Eva Norton Prude, moved to Clearwater and started their family. They were active in church, community, and intramural sports leagues in the thriving beach town. His mother and stepfather adored having them close by and spoiling their granddaughters. In 1966, Cooper was lured by Magnavox away from Honeywell, and thus began a long career with that consumer electronics company in their Personnel department. He loved Human Resources and excelled in each venture. His family moved first to Champaign-Urbana, Illinois, then to Fort Wayne, Indiana, as Cooper rose along the corporate ladder. He added golf and tennis to his sports repertoire with friends in the Pine Valley neighborhood, in addition to staying active in church, community, and his daughters’ schools. In 1980, Cooper helped spearhead a consolidation effort to move thousands of Magnavox employees and families from several national Magnavox offices to new headquarters in Strawberry Plains, Tennessee, just outside of Knoxville. Of all of his accomplishments in their new city, he was most proud of two: leading a company-wide endeavor partnering employees as volunteer mentors with students in Knox County schools, and serving on the University of Tennessee Chancellor’s Advisory Team. Although Cooper was a graduate of Carson-Newman, just a few miles from Knoxville, he adopted the University of Tennessee, and then Middle Tennessee State University, both of his daughters’ schools, as his new “home teams.” He was famous for tailgating, wearing orange and white, and blue and white, respectively. Although busy with work and supporting his three favorite universities, he always made time for golf and tennis with friends in Fox Den. After retiring from Magnavox as the Vice-President of Personnel, he joined a friend and former co-worker at The Transition Team, coaching associates to make successful transitions into new jobs through a process of dealing with the emotions of job loss, discovering passions, and uncovering new opportunities. He took advantage of his status as a new bachelor and empty-nester working and living in Knoxville, Charlotte, North Carolina, and then back to Knoxville, during those years. In 1996, while on a visit to see a favorite uncle in Tupelo, Cooper reconnected with a childhood sweetheart and Tupelo native, Barbara Reedy Godwin. After several years of dating and traveling between Knoxville and Tupelo, Cooper and Barbara were married on August 19, 2006. He officially retired – for good this time – and moved to Tupelo. Cooper and Barbara took great pleasure in their beautiful retired life for 25 years. They loved exploring their hometown, trying new restaurants, spending time with family, reading, and watching favorite sports events and primetime drama shows on television. Until his health prohibited it, they also appreciated opportunities to travel to Dallas to visit Cooper’s daughters’ families, and visit friends in Knoxville to attend Tennessee football and basketball games. Cooper’s “third chapter” was all he hoped and dreamed it could be. Cooper is survived by his wife, Barbara; his two daughters, Lisa Sams (Scott) of Plano, Texas and Leslie Reid (John) of Frisco, Texas; three beautiful granddaughters, Kirstin Reid Michaud (Tim) of Cromwell, Connecticut, Reilly Cooper Reid (17) and Ryan Norton Reid (15) of Frisco, Texas; several cousins, Karen Cooper Dieckmann and Kim Cooper Long both of Tupelo, Anne Cooper Owen of Montgomery, Alabama, Carol Lynn Cooper Lesmeister of Memphis, Tennessee, and William Garland “Buddy” Prude of Los Angeles, California. Pallbearers will be Scott Sams, John Reid, Kyle Cofer, Clay Godwin, Tommy Collins, Justin Waldrop, Will Kline, and Mike Cayson. In lieu of flowers, the family requests gifts be made in Cooper’s memory to Sanctuary Hospice House, 5159 Main Street, Tupelo, MS 38801. They are grateful for the tender loving care that the nurses and staff provided Cooper during his final days. Services honoring Cooper’s life will be 2 p.m., Monday, May 3, 2021, at the Jefferson Street Chapel of W. E. Pegues, Tupelo. Visitation will be 1 p.m. until service time, with graveside services immediately following at Lee Memorial Park. Expressions of sympathy may be left at www.peguesfuneralhome.com

Tupelo &#8211; Cooper Prude died Wednesday, April 28, 2021, at Sanctuary Hospice House. After several years of disappointment that his heart disease, metastatic cancer, and Alzheimer&#8217;s disease were too much for his once strong body and... View Obituary & Service Information

The family of Cooper Prude created this Life Tributes page to make it easy to share your memories.

Send flowers to the Prude family.