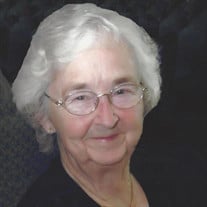 Brunswick, Georgia, formerly of Tupelo--Charlie Mae Umfress Westmoreland passed away Sunday, January 2, 2022 in Brunswick, Georgia. She was born on July 30, 1927, in Tupelo, Mississippi, the daughter of William McKinley Umfress and Mattie Jane Benefield Umfress. After teaching one year, she married John Reed Westmoreland (also of Tupelo) on January 25, 1949. John was in the Navy, and his time in the service took them to Pensacola, Florida; Bremerton, Washington; Fort Campbell, Kentucky; Clarksville, Tennessee; Norfolk, Virginia; Madrid, Spain, and Atlanta, where John retired. Along the way, as a Navy spouse, Charlie Mae taught sewing classes at Sears, volunteered with the PTA and Girl Scouts, and was active in the garden club and the Daylily Society. After John retired from the Navy, they moved back to Tupelo. For many years Charlie Mae managed the Verona Senior Citizen program. She was a prolific gardener, noted for her generosity in sharing her many daylilies, roses, and the bounty of her large vegetable garden. In 2012, she moved to Atlanta, Georgia, to be closer to family. Charlie Mae's priorities were always her faith, family, and community throughout her life. Charlie Mae leaves behind two daughters, Jane Swanson (Reid) of Los Angeles and Judy Sellner (Craig) of St. Simons Island; a son, Rod Westmoreland (Kelly) of Atlanta; four grandchildren, Ryan Swanson Swisher (Hannah), Claire Parker (Jacob), Samantha Westmoreland and John Westmoreland; two great-grandchildren, Crews Reed and Daisy Mae Parker; and a beloved honorary grandson, Taylor Popp. She was preceded in death by her husband of 60 years, John Reed Westmoreland. Services will be 1:00 p.m. Tuesday, January 11, 2022 at Unity Presbyterian Church in Plantersville with Dr. John Armistead officiating. Visitation will be from 12 p.m. until service time Tuesday at the church. Burial will be in the Unity Presbyterian Church Cemetery. W.E. Pegues Funeral Directors is in charge of the arrangements. Pallbearers will be Ryan Swanson Swisher, John Westmoreland, Jacob Parker, Mac Reedy, Mike Boyd, and Brooks Walker. Memorials may be made to the Unity Presbyterian Church Cemetery Fund in the care of Mac Reedy, 1996 S. Eason Boulevard, Tupelo, MS 38804. Expressions of sympathy and fond memories may be shared at www.peguesfuneralhome.com.

The family of Charlie Mae Westmoreland created this Life Tributes page to make it easy to share your memories.

Send flowers to the Westmoreland family.