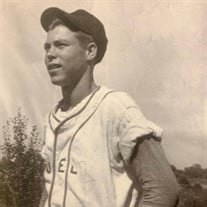 Saltillo-- Charles Harris “Buddy” Knight, Jr. passed away peacefully at his home on February 14th, 2022 at 11:44 PM after an extended illness. Buddy was born and raised in Saltillo, Mississippi where he raised two sons, four grandsons, four great grandsons, one great granddaughter and an exceptional garden. He was born March 7, 1941 to Charles Harris Knight, Sr. and Kathryn Langston Knight. A graduate of Saltillo High School, where he was voted Mr. Saltillo High School 1960, Buddy followed Saltillo sports especially baseball as long as he lived. A natural athlete, Buddy excelled in baseball and basketball. He played Lee County American Legion baseball, as well and was recruited by the Boston Red Socks out of high school, but Buddy chose instead to marry the love of his life, Jannette Pannell. They married on November 24, 1960. He was an accomplished golfer with six hole-in-ones throughout his life. He also shot golf scores at or below his age from his 66th through 74th birthdays. Buddy worked for many years at Penn Tire, and then enjoyed many days on the Natchez Trace Golf Club keeping the grounds green and manicured before an early morning round of golf. Before retiring he joined his sons in their cable business, Knightpaths, and he often talked about the people they met and the places they worked. After retiring he spent his days gardening, woodworking and coaching the boys in golf and baseball techniques on what he fondly referred to as Knight Hill. He also enjoyed watching any sporting event that he could find on TV. He leaves behind his beloved wife of 61 years Jannette; his two sons, Charles “Butch” Knight III and his wife Gail, and William “Bubba” Knight and his wife Deanna; his four grandsons, Charles “Charlie” Knight IV, Cory Knight and wife Jessie, Cody Knight and wife Sunni, and Case Knight and wife Ashley; his five great grandchildren, Katy, Ethan, Noah (Cory) and Gatlin, Cade (Cody); one sister Kay Glover; and several nieces and nephews. He also leaves behind dear family friends from all over the world. Buddy and Jannette met Soretha Kotze and her family online in 1998 after two visits to South Africa they considered “S” and her three daughters Petro Gerber, Annika Smith, and Carake Kriel all from South Africa as part of the family. He loved to joke with and easily adopted his son's foreign exchange students into his family. They include Sarah Skorubski (Germany), Vanessa Libet (Brazil), Zhenia Sandanova (Russia), Mila Erakovic (Serbia), and Polina Dobrianska (Ukraine). A private ceremony was held for the family. W.E. Pegues Funeral Directors was entrusted with the arrangements. Expressions of sympathy and fond memories may be shared at www.peguesfuneralhome.com.

Saltillo-- Charles Harris &#8220;Buddy&#8221; Knight, Jr. passed away peacefully at his home on February 14th, 2022 at 11:44 PM after an extended illness. Buddy was born and raised in Saltillo, Mississippi where he raised two sons, four grandsons,... View Obituary & Service Information

The family of Charles Harris "Buddy" Knight created this Life Tributes page to make it easy to share your memories.

Send flowers to the Knight family.