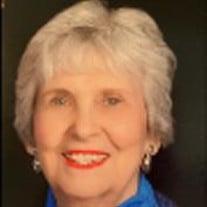 Tupelo--Mrs. Catherine Orsborn Guyton, 80, passed away Tuesday, May 3, 2022, after a long battle with cancer. She left peacefully after one final conversation with her husband and each of her children and grandchildren. Catherine was born in Greenwood on August 5, 1941, to Henry George and Cornelia Batton Orsborn. She grew up in Greenwood and graduated from Greenwood High School in 1959. She continued her education at MSCW and transferred to Ole Miss her sophomore year where she met her future husband, Dick Guyton. She graduated with a B.A. degree in Education in 1962. After graduation, she went to work as a fourth grade teacher at Bankston Elementary School in Greenville. She and Dick married on September 14, 1963, at the First Presbyterian Church of Greenwood. They then moved to Killeen, Texas to serve in the U.S. Army. There she taught elementary school for one year. In 1965, they moved to Meridian, where they lived for seven years. They were blessed with their two children, David and Janet, while living in Meridian. In 1972, the family made their final move to Tupelo. In Tupelo, she was a faithful and active member of Calvary Baptist Church. She began the Operation Christmas Child Shoebox Program at Calvary years ago and also taught pre-school there for many years. She is most fondly remembered for the years she dedicated to teaching the College Sunday School class at Calvary with Dick. She will be missed by her husband, Dick; her son, David (Katie) of Oxford; her daughter, Janet Magruder (Harris) of Tupelo; and her six grandchildren, Matthew Guyton of Nashville, Tennessee, Mary Arden (Noah) Pillault of Charleston, South Carolina, Allie Jaggers, Tanner Jaggers, Bo Jaggers, and Land Magruder, all of Tupelo. She is also survived by her sister, Ann Mallard of Athens, Georgia and several nieces and nephews. She was preceded in death by her parents, her brother, Henry and her granddaughter, Ella Catherine Macgruder. Services will be held 12 p.m. Friday, May 6, 2022 at Calvary Baptist Church with Dr. John Boler and Rev. Jim Yates officiating. Visitation will be 10 a.m. until service time Friday at the Church. A family burial will be held Friday afternoon. W. E. Pegues Funeral Directors is entrusted with arrangements. Her grandchildren will serve as pallbearers. Honorary pallbearers will be members of the Piggie Caldwell Sunday School Class at Calvary Baptist Church. In lieu of flowers, memorials may be made to Operation Christmas Child, Samaritan’s Purse, Post Office Box 3000, Boone, NC 28607, or Calvary Baptist Church, 501 West Main Street, Tupelo, MS 38802. Expressions of sympathy and fond memories may be left at www.peguesfuneralhome.com.

Tupelo--Mrs. Catherine Orsborn Guyton, 80, passed away Tuesday, May 3, 2022, after a long battle with cancer. She left peacefully after one final conversation with her husband and each of her children and grandchildren. Catherine was born in... View Obituary & Service Information

The family of Catherine Orsborn Guyton created this Life Tributes page to make it easy to share your memories.

Send flowers to the Guyton family.