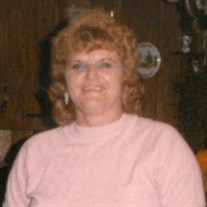 Carolyn A. “Carol” Brown, 69, passed away Wednesday, July 1, 2020 at the University of Alabama Hospital in Birmingham. Carol was born June 10, 1951 in Helena, Arkansas, the daughter of James A.F. Cooper and Ona Hazel Annette Williams Cooper. While Carol worked in several capacities during her early years, her greatest joy was found in her career as wife, mother, grandmother, and great-grandmother. She loved taking care of her family and was the rock upon which they leaned. Carol also enjoyed her pets, watching her favorite TV shows, and playing computer games. She leaves behind her husband of 37 years, James Brown of the Palmetto Community; two daughters, Tanya Cunningham and her husband, David, of Ripley and April Elliott of Grovetown, Georgia; five grandchildren, Tiffany Bledsoe, Shawna Rogers and her husband Josh, and John”Bubba” Bledsoe III, all of Palmetto, and Eddie “Trei” Freeman III and his wife, Celeste, of Grovetown, Georgia, and Donte Freeman also of Grovetown; four great-grandchildren, Keaira Biggs, Kylynn Bledsoe, Aria Nova Freeman, and Aaiden Hancock; three sisters, Barbara Kirk and Anita Ledbetter, both of Fulton, and Debra Davis of Saltillo. Carol was preceded in death by her parents; her daughter, Debra Jean Elliott; and a sister, Jean Parker. Services will be 2 p.m. Sunday, July 5, 2020 at the Jefferson Street Chapel of W.E. Pegues with Bro. Mike Sanders officiating. Burial will be in Keyes Cemetery. Visitation will be 5 p.m. until 8 p.m. Saturday at W.E. Pegues, Tupelo, and 1 p.m. until service time on Sunday. Due to the City of Tupelo ordinance, friends and family are kindly requested to wear masks at all times while inside the funeral home. Pallbearers will be John Bledsoe III, Eddie Freeman, Donte Freeman, Ryan Mason, Josh Rogers, and Ethan Elliott.. Expressions of sympathy may be left at www.peguesfuneralhome.com

The family of Carol Brown created this Life Tributes page to make it easy to share your memories.

Send flowers to the Brown family.