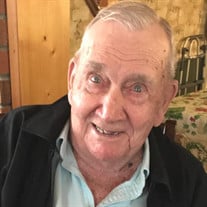 Eggville Community--Carester Hallmark passed from this life into his eternal home on the evening of December 13, 2021 at the Hallmark Family farm in Eggville. A lifelong resident of the Eggville Community, Carester lived on the farm on which he was born on January 5, 1925 to Henry and Effie Hallmark. Born into a farming family during the Great Depression, he believed in hard work, neighbors helping neighbors, and using the resources you had to make things work. In 1934, at the age of nine, Carester recalled riding with his father in their Ford Model T to Tupelo to meet President Franklin Roosevelt during his visit to Tupelo. Carester served his country honorably as a member of the U.S. Army 42nd division, also known as the “Rainbow Division” in Europe. He had fond memories of serving in Austria after the end of World War II, including serving as a guard to General Eisenhower. After returning from the War, Carester drove a truck delivering ice and milk. It was during one of his deliveries that he met the love of his life, Charlie Ruth (Webb) Hallmark. Their first date was attending a church service at Crossroads Church in the Auburn community. They would marry in 1947 and enjoy 72 years of marriage. Out of that union came three children—Dennis Hallmark (Debbie), Diane Dickerson and Jimmy Hallmark (Linda); six grandchildren—Greg Dickerson (Angel), Chris Hallmark (Holly), Carmen Perkins (Morgan), Brent Hallmark (Codi), Lisa Lindley (Matt) and Nicole Johnson; and 14 great grandchildren. The grandchildren and great- grandchildren have precious memories of “Papaw” riding them around the farm on the tractor and the four-wheeler. He was preceded in death by his parents; his wife, Charlie Ruth; four brothers; and a son-in-law, Gary Dickerson. After working for several years for the Tennessee Valley Authority (TVA), Carester and Charlie Ruth went into the poultry business with Marshall Durbin Co. During this period of over 30 years in the poultry business, Carester was consistently in the top three producers for Marshall Durbin. He continued this work as well as raising beef cattle until his early 80s. Carester was a member of Eggville Church of Christ for many years as well as the East Main Church of Christ during the later years of his life. Though he was not one who was inclined to be in the spotlight, Carester and Charlie Ruth led their family to know Christ and their faith was handed down to three subsequent generations. He taught his family through his words and, perhaps more importantly, through a living example of service to others. He had compassion for the plight of those less fortunate and taught us Godly virtues of humility, morality and modesty. In these ways, Carester and Charlie Ruth leave behind a rich legacy that endures for generations to come. A Celebration of Life is planned for 11 a.m. Friday, December 17th at at East Main Church of Christ. Barry Kennedy will officiate. Visitation will be on Thursday, December 16 from 5 until 7 p.m. at W.E. Pegues, Tupelo. A private, family burial service will be held at Crossroads Christian Cemetery with full military honors. Pallbearers will be Greg Dickerson, Morgan Perkins, Joe Paul Perkins, Chris Hallmark, Brent Hallmark, Taylor Hallmark and Dudley Hallmark. Expressions of sympathy and fond memories may be shared at www.peguesfuneralhome.com.

Eggville Community--Carester Hallmark passed from this life into his eternal home on the evening of December 13, 2021 at the Hallmark Family farm in Eggville. A lifelong resident of the Eggville Community, Carester lived on the farm on which... View Obituary & Service Information

The family of Carester Hallmark created this Life Tributes page to make it easy to share your memories.

Send flowers to the Hallmark family.