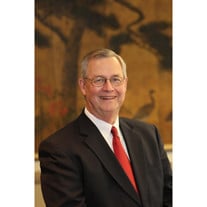 Calvin Dye Saltillo formerly of Cleveland- Robert Calvin Dye, 69, died Wednesday, January 10, 2018 at the North Mississippi Medical Center. Calvin was born May 20, 1948 to Robert Green Dye and Martha Elizabeth Clark Dye. Calvin graduated from Vardaman High School and earned his bachelor's degree at Delta State University and graduated from the Mississippi School of Banking. On December 16, 1979, Calvin married Charlotte Armstrong in Vardaman. From 1996 until his retirement in 2014, Calvin was the President and CEO of the Cleveland State Bank and continued after his retirement to serve as a board member. Before joining the Cleveland State Bank, he was associated with the Federal Land Bank in Greenwood, Greenville, Charleston and Cleveland. He also served as a member of the board of directors of the Mississippi Bankers Association from 2008 to 2016. Calvin was a long time member and deacon of the First Baptist Church in Cleveland and a current member of First Baptist Church in Tupelo. He served on the Stewardship Committee and Counting Team of First Baptist Church in Tupelo. Calvin was a former mason, member of the Cleveland Chamber of Commerce, and member of the Cleveland Rotary Club. He also served as the treasurer of the Mississippi Grammy Museum in Cleveland and in the United States Army. Calvin was an avid hunter, fisherman, motorcycle enthusiast and rider. Above all else he loved his church, his family and grandchildren. He was a kind and gentle man along with being a wonderful friend to many. Survivors include his wife, Charlotte Dye of Saltillo; daughters, Emily Dye Elliott and husband John Mark of Tupelo, Claire Dye of Cleveland and Dr. Valerie Norton and husband, Allen of Corinth; five grandchildren, John Coley Elliott, Scottie Elliott, Avery Boyles, Selah Boyles, and Jane Norton and sister-in-law, Rita Carter and her husband Phil of Raymond. He is preceded in death by his parents. Visitation will be 11 a.m. until 2 p.m. Saturday, January 13, 2018 at First Baptist Church, Tupelo. Services will be held 2 p.m. on Saturday, January 13, 2018 at First Baptist Church, Tupelo with Rev. Matt Powell and Rev. Brad Beckwith officiating. Burial will follow at Vardaman Cemetery. Pallbearers will be Bobby Douglas, Gene Bishop, Eddie Daves, Don Lindsey, Don Knight, Christy Finke, Mark Box, Tyrone Newsome and Jeffrey Newsome. Honorary pallbearers will be Harry Lott, Randy Howarth, Bill Griffith, Brian Bishop, Danny Whalen, George Steen, Homer Sledge, Jr., Norman Clark, Robert Lee Clark, Danny Clark and Bob Dye and Buddy Ware. Memorials may be made to the American Heart Association, 4830 McWillie Circle, Jackson, MS 39206. Expressions of sympathy may be left at www.peguesfuneralhome.com.

The family of Calvin Dye created this Life Tributes page to make it easy to share your memories.

Send flowers to the Dye family.