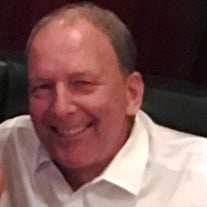 Britt Anthony Allred, age 60, passed away Monday, March 7, 2022 at the North Mississippi Medical Center. Britt was born June 3, 1961, the son of James Melvin Allred and Louise Britt Allred. A lifelong resident of Tupelo, he was a 1979 graduate of Tupelo High School and then attended Mississippi State University where he was the manager of the basketball team. Britt began his working career at Lane furniture right out of college. He spent 35 years in and around the business culminating as an account executive with the Alan White Company with many of the top 100 retailers in his portfolio. Along the way he partnered with other furniture guys that sold fabric to the furniture industry. After China stole the fabric business he was VP of Sales for Bauhaus furniture and later President under the La-Z-Boy umbrella and part owner of Bauhaus when LZB sold them. He was a furniture guy’s "Furniture Guy". One of the most upbeat people one could ever meet. Even after his health failed if you asked him how he was his answer was always" Perfect". He had a unique handshake that conveyed his warmth and honesty. Britt had a way with people that drew them close to him because he honestly cared about them. Britt loved traveling and calling on his customers/friends. He was always willing to lend a hand even with competitors. He was truly a consummate professional. The furniture industry will be less without him. He was currently attending church at The Orchard. Britt loved spending time with his children and traveling to the beach. He also enjoyed playing golf and a good Mexican meal. He leaves behind his wife, Cathy Comer Allred of Tupelo; son, Brandon Allred (Kimberly) of Atlanta; daughter, Katie Allred of Tupelo; and his mother, Louise Allred of Tupelo. Britt was preceded in death by his dad, James Melvin Allred; and a brother, Tim Allred. A memorial service honoring Britt’s memory will be at 2 p.m. Friday, March 11, 2022 at The Orchard Tupelo with Dr. Bryan Collier officiating. Kevin Wood will deliver a eulogy. Visitation will be 12 p.m. until service time Friday at the church. W.E. Pegues Funeral Directors has been entrusted with the arrangements. Honorary Pallbearers will be Walter Ferguson, Kyle Fleckenstein, Tommy Muzekari, Jeff Scoville, Greg Morgan, John Seymour, Randy Spak, Don Roberts, Doug Gordon, and Al Wiygul. Expressions of sympathy and fond memories may be shared at www.peguesfuneralhome.com.

The family of Britt Allred created this Life Tributes page to make it easy to share your memories.

Send flowers to the Allred family.