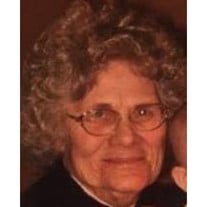 Bonnie Fay Stegall   Carolina Community - Bonnie Fay Stegall, 79, passed away Monday, February 20, 2017, at North Mississippi Center. Bonnie was born February 25, 1937, in Monroe County to Abner Garvin and Effie Mae Gann. Earlier in her life Bonnie worked in garment manufacturing as a seamstress but was a homemaker for most of her life. Bonnie loved to go fishing, especially for catfish. She was a member of The Church of God. Bonnie was a great mother and grandmother who was very much loved.   Survivors include her son, Danny Joe Starling (Janice) of Shiloh Community; six grandchildren, Delisa Price (Jason) of Mooreville, Brian Starling of Oxford, Sonya Persbacker (Matthew) of Mooreville, Micheal Starling of Mantachie, Nicole Starling of Baldwyn and Crystal Starling of Pontotoc; nine great-grandchildren.   She is preceded in death by her parents, Garvin and Effie Gann; the father of her Children, Billy Joe Starling; her two sons, Phillip Starling and David Starling; three brothers, Hershel Gann, Herman Gann and Thurman Gann; one sister, Jewelene Gann.   Services will be 2 p.m. Thursday, February 23, 2017, at the Jefferson Street Chapel of W.E. Pegues with Rev. Jeremy McMahan officiating. Graveside services will follow at New Chapel Cemetery.   Visitation will be from 5 p.m. until 9 p.m. Wednesday, February 22, 2017, at W. E. Pegues, Tupelo.   Expressions of sympathy may be left at www.peguesfuneralhome.com.

The family of Bonnie Stegall created this Life Tributes page to make it easy to share your memories.

Send flowers to the Stegall family.