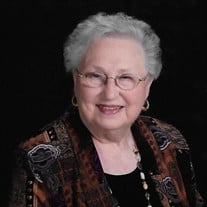 Bobbie Nell Harris Pitts Tupelo- Bobbie Nell Harris Pitts, at the age of 87, went to her heavenly home on Thursday, March 4, 2021. She was born in Prentiss County, Mississippi on November 30, 1933, to Troy and Ouida Harris. In 1951, Bobbie graduated from Itawamba Agricultural High School. She obtained an Associate’s degree from Itawamba Junior College. Following graduation, she joined Rockwell International in Tupelo. She also worked a number of years in the office at Mantachie Manufacturing Company. Bobbie Nell left the work force to take on the role of which she was most proud, mother to her three children. While in Mantachie, she was active in church, school and civic organizations. After moving to Tupelo in 1980, she opened Second Glance, a ladies retail apparel store in New Albany and later expanded her store to include a location in Tupelo. Following the closing of her retail stores she was a member of the office staff at Hunter Mazda until their closing. In her later years, she was a resident of Traceway Retirement Community. Bobbie was the quintessential Southern lady and mother. Nothing made her happier than to cook for her family and friends. She loved and adored her grandchildren and great-grandchildren as they loved and adored her. She was preceded in death by her father and mother; her brother, Larry Harris; and her great-grandchild, Dawson Howell. She is survived by her son, Michael Harris Pitts of Tupelo; daughter, Alicia Pitts Goodson (Buzz) of Tupelo; daughter, Lori Pitts Fagan (David) of Vicksburg, her sister, Fay Smith of Mantachie; grandchildren, Richard Boehms of Williamsport, Tennessee; Justin Pitts of Gulfport, Lindsay Goodson Arant (Allen) of Bartlett, Tennessee, Lauren Boehms of Nashville, Tennessee; Kristen Pitts Howell of Tupelo, and Will Goodson of Tupelo; and great-grandchildren, Jane Allen, Bennett, Baird and Georgia Arant and Presley and Landry Howell. Visitation will be one hour prior to service time Saturday, March 6, 2021 at Wesley United Methodist Church. A service honoring Mrs. Bobbie Nell's life will be 1 p.m. Saturday, March 6, 2021 at the Wesley United Methodist Church with Dr. Bryan Collier officiating. Private Graveside services will follow in Lee Memorial Park. W. E. Pegues Funeral Directors is in charge of the arrangements. In lieu of flowers, memorial may be made to Methodist Senior Services, PO Box 1567, Tupelo MS 38802 or Sanctuary Hospice House, PO Box 2177, Tupelo, MS 38803. The family would like to extend their appreciation to the staffs at Traceway and Sanctuary Hospice House for their excellent care. Expressions of sympathy and fond memories may be left at www.peguesfuneralhome.com.

The family of Bobbie Nell Harris Pitts created this Life Tributes page to make it easy to share your memories.

Send flowers to the Pitts family.