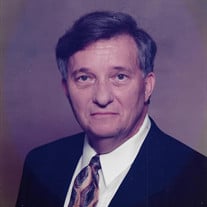 Tupelo-Bobby Charles Hanson, 84, passed away from this life and entered his heavenly home Tuesday, September 21, 2021. He was born November 5, 1936, to Christine and Charlie Hanson in Pontotoc County. After graduating in 1954 from Pontotoc High School, he graduated from Itawamba Junior College in 1956, and Louisiana State University in the 1960’s. In 1958, Bob married the love of his life, Carol. Bob retired from Peoples Bank and Trust Company as Vice President, and then went on to his second career as a real estate appraiser. Bob and Carol worked alongside each other for over 20 years at Hanson Appraisal Service. He loved reading the word and ministering to everyone everywhere he went. He loved the Lord and spent much time in prayer each day. Bob was a member of First Baptist Church since the early 70’s, where he served as Deacon, Teacher, and Minister to the elderly. He is survived by his sisters, Linda Harbor (Junior) of Verona, and Judy Parker (Wayne) of Tupelo; Bryan Parker (Misty), whom he considered a son; and a host of nieces and nephews. Bob was preceded in death by his parents; his wife, Carol P. Hanson; and his sister, Debbie Hanson Edwards. Visitation will be 11 a.m. until service time Thursday, September 23, 2021 at First Baptist Church of Tupelo. A celebration of his life will be held 1 p.m. Thursday at the Church with Rev. Gayle Alexander officiating. Burial will be in Lee Memorial Park. W. E. Pegues Funeral Directors is in charge of arrangements. Pallbearers will be Wayne Parker, Lawson McClellan, Clay Parker, Hunter Parker, and Jon Parker, and Michael Underwood. Expressions of sympathy and fond memories may be left at www.peguesfuneralhome.com.

Tupelo-Bobby Charles Hanson, 84, passed away from this life and entered his heavenly home Tuesday, September 21, 2021. He was born November 5, 1936, to Christine and Charlie Hanson in Pontotoc County. After graduating in 1954 from Pontotoc High... View Obituary & Service Information

The family of Bob Hanson created this Life Tributes page to make it easy to share your memories.

Tupelo-Bobby Charles Hanson, 84, passed away from this life and...

Send flowers to the Hanson family.