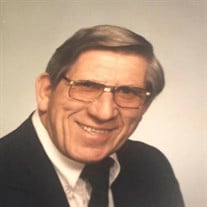 Bob Arnold Tupelo- Robert W. “Bob” Arnold, 94, gained his new body on Monday, April 11, 2022. Bob was born on September 3, 1927 to Charles C. Arnold and Odie Studards Arnold in Kossuth. Bob was fourth in a family of six. Due to a family situation, Bob and some of his siblings were sent to live with relatives. Bob`s maternal aunt, Lillian Crum, became his caregiver at an early age. Bob said this was the best thing that could have happened to him. He was taught obedience, responsibility, and a love for God. Aunt Lillian was a kind, generous woman, who loved her little nephew very much. Right after his sixteenth birthday, Bob and three of his friends headed for Memphis, Tennessee to join the fight against Japan. Bob joined the United States Navy and was soon being bussed across the county to California for basic training. After basic training, he was sent to Asiatic Pacific. It was here that his ship was torpedoed and sunk. Bob was injured and sent to Hawaii to recuperate. Bob received the Victory Medal and an honorable discharge as Seaman First Class from Vallejo, California. Bob settled in Memphis, where he worked for A&P Tea Co. He soon became interested in professional wrestling. Throughout the years he wrestled throughout the mid-south and became a regular on Saturday morning wrestling television show on WHBQ, hosted by Lance Russel and Dave Brown. After meeting his wife, the love of his life, he moved to Tupelo in 1967 and became a fan favorite, soon earning him the ring name “The Tupelo Kid.” He married his wife, Wanda Brown Arnold, on August 26, 1967. They would have celebrated 55 years of marriage this year. In Tupelo, he worked at Palmers Big Star and then Kroger, where he worked for twenty-five years before deciding to retire. After retirement from wrestling, Bob went to work for Sheriff Bill Mitchell as a Deputy Sheriff and worked continuously for every Sheriff until Sheriff Presley died. Bob retired from the Sheriff’s Department that same year. Bob loved working in his yard and traveling, and most of all he enjoyed meeting new people. Bob leaves behind his wife of 54 years, Wanda Brown Arnold of Tupelo; sons, Marc Arnold and his wife, Kim, of Guntown, and Kip Arnold of Tupelo; daughters, Diane Knichel and her husband, Jimmy, of Oxford and Janet McDaniel of Arlington, Tennessee; brother, Lee Goode of Amory; grandchildren, Jennifer Smith, and her husband, Alan, Jake Melton, and his wife, Sonya, Jaylin Blaylock, and her husband, Taylor, Hayden Copeland, and his wife, Rebecca, and Karla McDaniel; great-grandchildren, Rylan, Jakob, Madison, Kayle, and Dalton; and great-great-grandchild, Asher and his fur baby, Bubba. Bob is preceded in death by his parents; son, James Dennis; brothers, Orlando Arnold, Ernest Arnold, Howard Goode, and Roy Goode; sisters, Ruby McDowell, Helene Roe, Ruby Arnold, Paulette Mageary, Romael Martin, and Ada White; father and mother-in-law, Leland and Syble Brown; and his fur baby, Samey Soso. Visitation will be 11 a.m. until service time Friday, April 15, 2022 at W.E. Pegues, Tupelo. Services honoring Bob’s life will be 1 p.m. Friday, April 15, 2022 at the Jefferson Street Chapel of W. E. Pegues. Burial will be in Longview Cemetery. Honorary pallbearers will be David Payne, James Barton, Lee DuBois, Paul DuBois, Sonka Keopradit, and Jimmy Knichel. Memorials may be made to St. Jude Children’s Research Hospital, P.O. Box 50, Memphis, TN 38101; Tupelo Lee Humane Society, P.O. Box 2143 Tupelo, MS 38803; or American Cancer Society, P.O. Box 22478, Oklahoma City, OK 73123. Expressions of sympathy and fond memories may be left at www.peguesfuneralhome.com.

The family of Bob Arnold created this Life Tributes page to make it easy to share your memories.

Send flowers to the Arnold family.