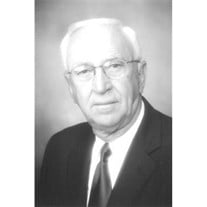 BILLY WHEELER Tupelo- Billy Franklin Wheeler, 82, died Wednesday, July 13, 2016, at Countrywood Manor in Mantachie. He was born September 20, 1933 in Itawamba County to Argel and Uneeda Wheeler. In 1951, he graduated from Fulton High School. After serving in the Army, he attended Itawamba Community College. Billy graduated from Mississippi State University in 1957 with a degree in Education. On January 27, 1957, he married Shirley Threldkeld. Billy worked for Weatherall's Inc., becoming the owner in 1964. He was an active member of Calvary Baptist Church. He was a Paul Harris Fellow and past president of the Tupelo Rotary Club where he was a member for 46 years. Billy was honored as Itawamba Community College Alumnus of the Year in 1998 and was past chairman of the ICC Foundation. He was past president of the Community Development Foundation and served on the board of North Mississippi Health Services. A service celebrating his life will be held at 5 p.m. Friday, July 15, 2016, at the Jefferson Street Chapel of W. E. Pegues with Dr. John G. Armistead officiating. Burial will be at Tupelo Memorial Park. Billy is survived by his wife, Shirley Wheeler; one daughter, Julie Ann Gough (Phillip); one son, John G. Wheeler (Tammy); four granddaughters, Molly Elizabeth Gough, Margaret Lee Wheeler, Mary Allison Gough and Kathryn Grace Wheeler, all of Tupelo. He was preceded in death by his parents. Visitation will be 3:30 p.m. until service time Friday, July 15, 2016, at W. E. Pegues, Tupelo. Pallbearers will be Jim Threldkeld, James Williams, Larry Stewart, Mickey Holliman, Dr. David Cole, Dr. Benton Hilbun, Robin McGraw and Jerry Clayton. Memorials may be made to The Sanctuary Hospice House, P.O. Box 2177, Tupelo, Mississippi 38803 or a charity of the donor's choice. Expressions of sympathy may be left at www.peguesfuneralhome.com.

The family of Billy Wheeler created this Life Tributes page to make it easy to share your memories.

Send flowers to the Wheeler family.