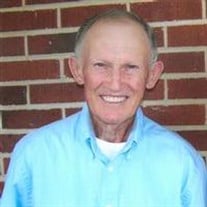 BILLY W. SMITH Guntown – Billy Wayne Smith, 77, passed away Saturday, April 22, 2017 at Sanctuary Hospice House. He was born in Lee County on January 19, 1940 to Thomas Earl and Dollie Mae Chism Smith. Billy served his country in the United States National Guard 108th Aviation Division in Tupelo. During his working life, Billy worked in heating and air conditioning for over 50 years. On August 28, 1964, he married Jan Smith. He was an avid outdoorsman and enjoyed hunting of all kinds and fishing. Billy liked to share his love of hunting with younger men and taught them how to hunt. He enjoyed quiet time spent in a deer stand and enjoyed walking. Billy raised a garden every year and was well known for his tomatoes. He was a member of Birmingham Ridge Baptist Church. Survivors include his wife of 52 years, Jan Smith of Guntown; brothers, Tommy Smith of Guntown, Jerry Smith (Debbie) of Saltillo and Frankie Smith (Dorthea) of Iuka; sister, Mary Lee Jones (James) of Mantachie; sisters-in-law, Mavis Mallette (Wayne) of Saltillo and Violet Smith of Tupelo and a host of nieces and nephews. He was preceded in death by his parents; brother, Danny L. Smith; sisters-in-law, Joyce Jackson (Jimmy) and Mary Ann Smith and father and mother-in-law, Royce and Christine McBrayer. Visitation will be from 5 until 8 p.m. Monday, April 24, 2017 at W. E. Pegues, Saltillo. Services will be 2 p.m. Tuesday, April 25, 2017 at the Saltillo Chapel of W. E. Pegues with Rev. Bobby Holland and Rev. Frankie Smith officiating. Burial will be in Camp Creek Cemetery. Pallbearers will be his nephews, Greg Jones, Eric Jones, Robbie Smith, Jeff Smith, Steven Smith and Dewayne Smith. Honorary pallbearers will be Chuck McBrayer, Alan Merritt and Billy’s other hunting buddies, Chris Alred and Alred Heating and Air employees. Memorials may be made to Sanctuary Hospice House, PO Box 2177, Tupelo, MS 38803. Expressions of sympathy may be left at www.peguesfuneralhome.com.

The family of Billy W. Smith created this Life Tributes page to make it easy to share your memories.