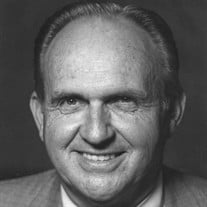 Tupelo- Billy “Bill” Barber Lyle, 92, died Saturday, January 9, 2021, at North Mississippi Medical Center. Born to Acles Ray and Ernye Lavelle Barber Lyle on June 30, 1928, Bill grew up in Tupelo. At a young age he became a member of the Methodist Church and attended services as long as his health permitted. After graduating from Tupelo High School in 1946, he attended Mississippi State University and was a member of Sigma Chi fraternity and the Society of Civil Engineers. Upon graduating from MSU in 1950, Bill joined the US Air Force. During his four years in the military, he was stationed at various US bases including Keesler Air Force Base in Biloxi where he was an instructor and served overseas in Korea for over a year. Upon his return, he was assigned to Turner Air Force Base in Albany, Georgia and prior to his discharge he was sent on assignment to Japan. For five years, Bill was an engineer at Alabama Dry Dock and Shipbuilding Company in Mobile, Alabama. He then worked for Rockwell International Corp. as a Sales Engineer. Though residing in Atlanta, Georgia, his work required him to travel throughout the south. During his years with Rockwell, he was recognized several times as the top salesman in the Atlanta District of the Pittburgh, Pennsylvania based corporation. Returning to Tupelo after retirement, Bill was active in Friends of the Lee County Library and the Northeast Mississippi Historical and Genealogical Society. His interest in genealogy started when his aunt, the family historian, asked him to research some ancestors in the Atlanta library. After assisting his aunt, he became an avid researcher and historian. The role grew from family research to helping others trace their histories. He was the co-author of multiple published books about Tupelo’s vast history. He become an active member of multiple genealogical societies include Sons of the American Revolution, Sons of Confederate Veterans, the Huguenot Society, Society War of 1812, the Magna Charta Barons, and Colonial Order of the Crown. He is survived by his sisters, Dr. Kathryn L. Stephens of Tupelo, and Mrs. Betty Thompson of Deland, Florida, as well as by several nieces and nephews. Bill was preceded in death by his parents and brother, Charles Lyle. Services honoring Bill’s life will be 1 p.m. Thursday, January 14, 2021 at the Jefferson Street Chapel of W. E. Pegues. Burial will follow at Lee Memorial Park. Honorary pallbearers will be the members of the genealogical organizations in which Bill participated, and those of the luncheon groups he attended in his earlier years. Memorials may be made to any charity of your choice. Expressions of sympathy may be left at www.peguesfuneralhome.com.

The family of Bill Lyle created this Life Tributes page to make it easy to share your memories.

Send flowers to the Lyle family.