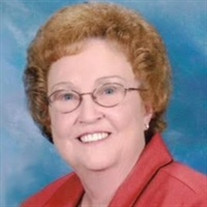 BETTY EARNEST   Tupelo - Betty Jane Earnest died on November 20, 2017 at North Mississippi Medical Center. She was born on August 4, 1935 in Itawamba County and was the daughter of Leaton and Marie Thomas of Ryan’s Well. Betty graduated from Itawamba Agricultural High School in 1952 and married her high school sweetheart, Bobby J. Earnest, that same year. Before his death in 2014, Bob and Betty celebrated 62 years of marriage. Betty was a founding member of the Fellowship Baptist Church in Kenosha, Wisconsin and a member of Calvary Baptist Church, Tupelo, since 1973. She taught elementary aged children in Sunday School for more than 50 years and was active on many  Church committees. She was employed in Catalog Sales at Sears in both Kenosha and Tupelo for more than two decades and enjoyed many years of helping to plan IAHS class reunions. She loved to travel and listen to Gaither music. Betty is survived by her sons, J. David Earnest (Margaret McKell) of Athens, Georgia and Timothy Earnest (Kim McCrea) of Zionsville, Indiana and brother, Jimmie Thomas, of Kenosha, Wisconsin. She was preceded in death by her parents and four sons, Paul, Mark, Joel and Michael Earnest. One of the greatest joys of Betty’s life was her eight grandchildren, Chris, Ryan, Lindsay, Robert, Timothy, Katy, James and Ava, and her eight great-grandchildren.  Friends and family are invited to a visitation followed by a memorial service on Saturday, December 16, 2017 at the Jefferson Street Chapel of W.E. Pegues. Visitation will begin at noon and the memorial service at 2 p.m. In lieu of flowers, the family requests memorials be made to the Cystic Fibrosis Foundation of Mississippi, 1907 Dunbarton Dr. #C, Jackson, MS 39216 or a charity of your choice.   Expressions of sympathy may be left at www.peguesfuneralhome.com.

BETTY EARNEST   Tupelo - Betty Jane Earnest died on November 20, 2017 at North Mississippi Medical Center. She was born on August 4, 1935 in Itawamba County and was the daughter of Leaton and Marie Thomas of Ryan&#8217;s Well. Betty graduated... View Obituary & Service Information

The family of Betty Earnest created this Life Tributes page to make it easy to share your memories.

Send flowers to the Earnest family.