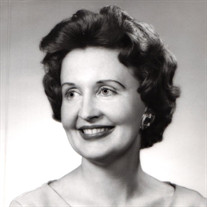 Betty Miller Castles passed away Tuesday, August 17, 2021 at Lynnfield Place in Selmer, Tennessee. She was 93. Betty was born February 18, 1928 in Wilmington, North Carolina, the daughter of William Alexander Miller and Audrey Wessel Miller. After her graduation from high school in New York City, Betty attended Bob Jones University and Upsala College. She then began working as a stewardess for American Airlines when she met John Castles and married February 20, 1950. In 1964 they moved to Tupelo where John served as an agent for the FBI. Betty’s time was then filled with taking care of her family and home. She served in many church and community activities. Betty was a member of First Presbyterian Church of Tupelo for 55 years where she sang in the choir and was active in the Presbyterian women’s ministries. She loved music and until her death was an avid reader. After her husband died, Betty moved to Selmer to be near her son’s family. She became a member of Clear Creek Baptist Church where her son, Chuck, is the pastor. Betty leaves behind two children, Chuck Castles and his wife, Gail of Selmer, Tennessee and Audra Alexander and her husband, Mark of Morganton, North Carolina; six grandchildren, Jonathan Castles and his wife, Nikki of Jackson, Tennessee, Joy Case and her husband, Benjie of Adamsville, Tennessee, Jason Castles and his wife, Jessica of Orlando, Florida, Jimmy Castles and his wife, Bridget of Gulf Breeze, Florida, Paul Alexander and his wife, Emily of Washington, D.C. and Bonnie Wagner and her husband Sean of Chapel Hill, North Carolina; and nine great-grandchildren. She was preceded in death by her parents; her husband, John; a brother, Don Miller, and a sister, Laverne Burroughs. Graveside services will be 2 p.m. Saturday at Tupelo Memorial Park with her son, Rev. Chuck Castles officiating. W.E. Pegues Funeral Directors is in charge of the arrangements. Pallbearers will be Jonathan Castles, Jason Castles, Jimmy Castles, Benjie Case, Sean Wagner, and Mark Alexander Memorials may be made to Clear Creek Baptist Church, 1728 Lawton Rd., Selmer, TN 38375 or to Sanctuary Hospice House, where her husband spent his last days, PO Box 2177, Tupelo, MS 38803. Expressions of sympathy may be left at www.peguesfuneralhome.com

The family of Betty Castles created this Life Tributes page to make it easy to share your memories.

Send flowers to the Castles family.