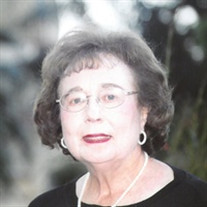 BETTY BRELAND   Tupelo – Betty Jean Breland, 88, life-long resident of Tupelo, passed away Tuesday, October 10, 2017 at the Laney Greenhouse in Traceway. She was born May 19, 1929 to Elford and Myrtle Lucille Means Duke. She graduated from Tupelo High School in the class of 1947 and attended Mississippi State University for two years. On February 10, 1955, Betty married Billy Breland and they were married until his passing in 2015. She began her carrier as a secretary for Attorney Wiley Blair in Tupelo. She spent a long and stellar career with BancorpSouth beginning when the bank was named the Bank of Tupelo, and continued through the Bank of Mississippi years to BancorpSouth. Betty was longtime administrative assistant to bank chairmen J. C Whitehead and Aubry Patterson. She was a member of the National Association of Bank Women, and in her earlier years, a member of Business and Professional Women Club. Betty volunteered with the Salvation Army Auxillary and was a member of the Tupelo Garden Club. She enjoyed traveling and going on walking trips with her friends. She was an accomplished and talented artist. Betty was a long-time member of Calvary Baptist Church and active in Baptist Women.   She is survived by her sister, Edith D. Fikes (Charles) of Tupelo; brothers, Cecil Duke and Charles Duke (Pat) both of Tupelo; nieces, Brenda Williams, Tracy Glotzer, Carla Chandler, Karen McMillin, Kathie Scott, Cindy Duke and Lisa Paul; nephews, Bill Duke, Richard Duke, Eddie Stepp and Todd Duke.   She was preceded in death by her parents; husband; sister, Dot Stepp and brother, Claude Duke.   Services will be 2 p.m. Saturday, October 14, 2017 at the Jefferson Street Chapel of W. E. Pegues with visitation from 12 p.m. until service time Saturday. Rev. Bryant Barnes will be officiating and burial will be in Tupelo Memorial Park.   Pallbearers will be David Williams, Jim Couch, Keith Reece, Harold Hodges, Bill Duke and Tom Robinson.   Memorials may be made to Tree of Life Clinic and Family Fund at Traceway, 2800 W Main Street, Tupelo MS 38801.   Expressions of sympathy may be left at www.peguesfuneralhome.com.

The family of Betty Breland created this Life Tributes page to make it easy to share your memories.

Send flowers to the Breland family.