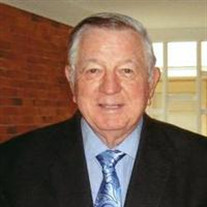 COACH BEN D. JONES Tupelo --On Friday, July 7, 2017, Coach Ben David Jones passed away at Methodist Hospice Residence in Memphis, Tenn. at the age of 87 years old. He was born in Hatley, Miss. on March 18, 1930 to Woody Victor Jones and Annie Durrett Jones.    Visitation will be Tuesday, July 11th from 4 until 7 p.m., and the funeral will be held Wednesday, July 12, 2017 at 2 p.m.  Both will be held at W. E. Pegues Funeral Directors in Tupelo. Graveside services will be in Tupelo Memorial Park immediately following the service.   He graduated high school in 1948 from Amory High School where he lettered in football in 1945, 1946, and 1947. Jones also lettered in baseball in 1947. At this young age, his love of sports was established.   From 1947 to 1950, Jones served in the Mississippi National Guard protecting the Mississippi Shoreline during hurricanes. Jones also served in the U.S. Navy during the Korean War from 1952 to 1954.   He earned his BS and MS degrees in 1955 at the University of Mississippi where he met his wife, Bobbye Franks.   Over the years, Jones pursued his love of coaching at several Mississippi schools including Hatley High School (1951-1952), Gulfport High School (1955-1961), Tupelo High School (1961-1962), Itawamba Agricultural High School (1963-1973), Itawamba Junior College (now ICC) (1973-1976), Meridian High School (1976-1978), and New Albany High School (1979-1987).   Jones’s long list of career honors includes Big 8 Basketball Coach of the Year, when he led Gulfport to the conference title in 1961, Tombigbee Coach of the Year in 1966 and 1972, Mississippi All-Star Coach in 1967 and 1971, President of the Mississippi Association of Coaches in 1971-1972, Chartered Mississippi Association Coaches Hall of Fame in 1972, Southeastern United States High School Football Coach of the Year in 1972 and 1986, Mississippi Junior College Coach of the Year in 1974 and 1975, Lecturer on Football at NCAA Football Convention and National High School Coaches Meeting, and Little 10 Conference Football Coach of the Year in 1979. Jones was a part of the National High School Coaches Association where he helped develop the tie-breaker rule in football in 1972. Jones was inducted into the Mississippi Association of Coaches Hall of Fame in 1981, the Itawamba Community College Sports Hall of Fame in 1999, and the Northeast Mississippi Football Coaches Hall of Fame in 2015. Coach Jones received his highest coaching career honor by his induction into the National High School Athletic Coaches’ Association Hall of Fame in June of 2017.   Jones served for many years on the Board of Directors of Mississippi Association of Coaches Hall of Fame and attended yearly meetings in Jackson, Miss. He authored numerous articles in national athletic publications.   Although Ben was known for coaching young men, he also had a great business mind. He owned the Dairy Kream Dairy Bar in Tupelo, Miss. and the Wigwam Restaurant in Fulton, Miss. He sold insurance for American General Insurance Company and worked for Riddell Sporting Goods. Jones also cherished his opportunity of working Spring Training for 10 years for the Cleveland Indians in Winter Haven, Fla.   He most recently spent his time enjoying and overseeing the planting and growing of pine trees as a professional tree farmer. He strategically planted seedlings on property he owned in several counties in North Mississippi. Jones was a former president and longtime member of several county forestry associations.   Jones was highly involved in his community. Jones was a member of Lion’s International where he served as Deputy District Governor of District 30-A in Northeast Mississippi. He was a member of the American Legion and served as the Commander of Post 51 in Fulton, Miss. He was also involved in the Forty & Eight serving as Correspondant Tupelo Voiture 1110 from 1992 to 2000. He was also the Chef de Trail North Mississippi La Societe Voiture Des 40 Hommes Et 8 Chevaux. He led a jailhouse ministry on Sunday mornings in Fulton, Miss. He was a lifetime Baptist and enjoyed partaking in various church activities. For years, he was passionate about giving miniature American flags to first-graders throughout North Mississippi as a proud veteran.   He was preceded in death by his wife, Bobbye Franks Jones; brother, Charles Jones; sister, Miriam Jones Springfield, and his parents.   He will be greatly missed by his two daughters, Becky Jones West (Steve) of Memphis, Tenn. and Ginger Jones Clegg (Joe) of Round Rock, Tex.; grandson, Ben West of Oxford; granddaughter, Taylor West of Memphis, Tenn; nieces, Carolyn Jones Chapman and Carol Springfield Carman, and nephews, Charles W. Jones and Bobby Jones.   In lieu of flowers, donations may be given in memory of Ben Jones to the Mississippi Coaches Association, c/o “Ben Jones Fund”, P.O. Box 1194, Clinton, MS 39060, or Mississippi Forestry Foundation, “Project Tree,” 620 North State Street, Suite 201, Jackson, MS 39202.   The funeral will be streamed live at www.peguesfuneralhome.com.   Expressions of sympathy may be left at www.peguesfuneralhome.com.

The family of Coach Ben D. Jones created this Life Tributes page to make it easy to share your memories.

Send flowers to the Jones family.