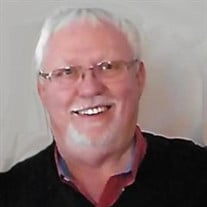 Steven Barrett “Barry” Bratton, 70, passed away Wednesday, September 9, 2020 at the North Mississippi Medical Center. A native of Tupelo, he was born November 8, 1949, the son of Alton E. and Marion Barrett Bratton. Barry was a proud American and served his country during the Vietnam War. He then worked for over 20 years in the finance industry and later started his own landscaping business. Affectionately known as BB by his wife, Lynne, they enjoyed 26 years together. He was an avid fan of Elvis Presley and never backed down from hard work. Barry was a wonderful husband, dad, and granddad, dedicated to his family. Many of his friends remember him as the kindest man they’ve ever met. He was a member of Verona United Methodist Church and was a strong believer. In reference to his faith, Barry stated himself, “I believe that Christ is the answer and our Savior. We need to believe that now more than Ever!” Barry is survived by his wife, Lynne Bratton of Tupelo; his daughter, Carrie Baldwyn and husband Blake of Mooreville; his granddaughter, Bailey Emerson Baldwyn; a grandson soon to be born, who is to be named after him, Presley Barrett Baldwyn; his sister, Bunny Darnell of Meridian; his brother, Butch Bratton and wife Carlan of Shannon; and quite a host of extended family members who will miss him greatly. He was preceded in death by his parents; his son, Ben; and a brother, Al Bratton Graveside services will be 11 a.m. Friday, September 11, 2020 as he is entombed at Lee Memorial Park Mausoleum beside his son, Ben, with Rev. Jeremy Funderburk officiating. W.E. Pegues Funeral Directors is in charge of the arrangements. Honorary Pallbearers will be Blake Baldwyn, A.J. Bratton, Spencer Bratton, Tad Campbell, Steve Crutcher, Brandon Ethridge, Dave Grana, David Neal, and Caleb Mercer. In lieu of flowers, memorials may be made to St. Jude Children’s Research Hospital, 501 St. Jude Place, Memphis, Tennessee 38105 or Verona United Methodist Church, Post Office Box 370. Verons, Miss. 38879. Expressions of sympathy may be left at www.peguesfuneralhome.com

Steven Barrett &#8220;Barry&#8221; Bratton, 70, passed away Wednesday, September 9, 2020 at the North Mississippi Medical Center. A native of Tupelo, he was born November 8, 1949, the son of Alton E. and Marion Barrett Bratton. Barry was a... View Obituary & Service Information

The family of Barry Bratton created this Life Tributes page to make it easy to share your memories.

Send flowers to the Bratton family.