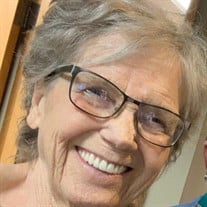 Barbara Michael Tupelo- Barbara Annette Daniel Michael, 82, went home to be with her Lord and Savior, Jesus Christ, on Monday, January 25, 2021. She was at home surrounded by her family in Tupelo. Barbara Annette Daniel was one of five children born to Grayford Thomas and Annie Elizabeth Thompson Daniel in Collinwood, Tennessee on July 27, 1938. Barbara loved Jesus and accepted him as her Savior as a young girl. After graduating from Collinwood High School in 1956, she went on to marry and raise four children and two step-children, whom she loved as her own. Barbara was well known for her love for her family, her great big smile and the generosity she showed towards others. Even on her hardest days, she always had a smile on her face. She loved to shop and always had her eye out for a good bargain. Rarely, would anyone visit her that did not leave with a gift she found that made her think specifically of them. Barbara loved spending time with her children, 15 grandchildren and several great grandchildren. She was affectionately known as “Granny” or “GiGi”. She was a collector of “stuff” and in her final days she wanted to share her “stuff” whether needed or not, with her family. While raising her children as a stay at home mom, she worked at helping to build the family business, Michael’s Mobile Equipment Service. Once her children were grown, Barbara went to work for Argenbright Security at Memphis International Airport. She spent over 15 years dedicated to keeping the public safe while traveling earning many awards and accolades. She was proud of her work but above anything else, she was most proud of her children. Barbara is survived by her children, Sterling Gilchrist of Collinwood, Tennessee, Darron Daniel of Fairplay, Colorado, Kelly Carraway of Lebanon, Tennessee, and Micki Lindsey (Michael) of Tupelo; stepsons, Randy Michael (Renee) and Darron Michael (Amy); 15 grandchildren; and several great grandchildren. She was preceded in death by her parents; brothers, Hoyt and Roger Daniel; sister Thelma Ruth Daniel; and an infant sibling. She would not want to put anyone at risk so a memorial service will not be held. Her children celebrated her at home. In lieu of flowers, memorials may be made to Sanctuary Hospice, PO Box 2177, Tupelo MS 38803. Expressions of sympathy may be left at www.peguesfuneralhome.com.

The family of Barbara Michael created this Life Tributes page to make it easy to share your memories.

Send flowers to the Michael family.