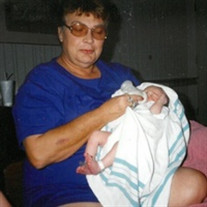 BARBARA ANN DYE   Saltillo - Barbara Ann Dye, 73, passed away Friday, November 17, 2017, after an extended illness at her home. She was born in Saltillo April 11, 1944, to Dempsey Dayton and Edna Hankins Rodgers. She graduated from Saltillo High School and later graduated from Creations Cosmetology School. She was married to James Tate Dye for 48 years until his passing on September 20, 2009. While James was in the United State Navy, they lived in Cuba, Norfolk, Virginia, Rhode Island and Charleston, South Carolina. They moved back to Saltillo in 1977, after James completed his Naval career. Barbara was the owner of Fellowship Beauty Shop for a number of years. Along with her husband, she owned Dye's Concession in Saltillo. People came from all over to have Dye Burgers and their "Liquid Gold" special sweet tea. Barbara enjoyed crafts, was an accomplished cake decorator, and was also involved in interior design. She was Church of Christ by faith.   Survivors include her daughter, Priscilla Young (Jeff) of Tupelo; grandchildren, Jeffrey Young, Jr. of Mooreville and Kadance Lollar (Alex) of Clovis, New Mexico; great-grandson, Owen Lollar and nephew, Terry Rodgers of Saltillo;   She was preceded in death by her parents; husband; two brothers, James and Timothy Rodgers and a special niece, Kimberly Rodgers.   Visitation will be from 4 until 7 p.m. Sunday, November 19, 2017, and from 12 until 2 p.m. Monday, November 20, 2017 at W. E. Pegues, Saltillo.   There will be private family services at a later date and burial will be in Spring Hill Cemetery.   Expressions of sympathy may be left at www.peguesfuneralhome.com.

BARBARA ANN DYE   Saltillo - Barbara Ann Dye, 73, passed away Friday, November 17, 2017, after an extended illness at her home. She was born in Saltillo April 11, 1944, to Dempsey Dayton and Edna Hankins Rodgers. She graduated from Saltillo... View Obituary & Service Information

The family of Barbara Ann Dye created this Life Tributes page to make it easy to share your memories.

Send flowers to the Ann family.