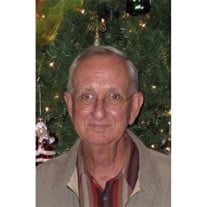 AUBREY GUY TANNER Verona - Aubrey Guy Tanner, 75, passed away Monday, August 8, 2016, at the Sanctuary Hospice House. He was born January 22, 1941, to Manlie Whitman and Arvella Tanner. He graduated from Shannon High School in 1959. After graduation he worked for Day-Brite Lighting and then Nesco where he retired as Operations Manager after 36 years of employment. Aubrey was married to Martha Williams Tanner, the love of his life, for 54 years and they were blessed with two children, five grandchildren and one great-grandchild. He loved spending time with his family. Aubrey enjoyed keeping his yard and garden, fishing, playing baseball, and watching his favorite football team, the Dallas Cowboys. He was a member of Verona Baptist Church. "I have fought the good fight, I have finished the race, I have kept the faith." 2 Timothy 4:7. Survivors include his wife, Martha Tanner of Verona; daughter, Teresa Cash (Danny) of Saltillo; grandchildren, Justin Byrd of Saltillo, Rachel Cash of Tupelo, Madison Tanner (Ryan), Ivy Tanner and Rushton Tanner of Katy, Texas; one great-grandson, Canon Kolbe; a host of nieces and nephews and numerous brothers and sisters-in-law and their families. He was preceded in death by his parents, Manlie Tanner and Arvella Tanner Holcomb, son, Timothy Reid Tanner, brothers, Fielding, Pascal and Sam Tanner; mother and father-in-law, Elmer and Jettie Williams. Visitation will be from 11 a.m. until 1 p.m. Wednesday, August 10, 2016, at W. E. Pegues, Tupelo. There will be a private family graveside service to follow. The family would like to give a special thank you to all of his caregivers. In lieu of flowers, memorials may be made to Sanctuary Hospice House, PO Box 2177, Tupelo, MS, 38803. Expressions of sympathy may be left at www.peguesfuneralhome.com.

The family of Aubrey Guy Tanner created this Life Tributes page to make it easy to share your memories.

Send flowers to the Tanner family.