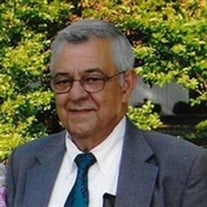 ANTHONY "TONY" SANSONE   Tupelo - Anthony F. Sansone, 76, died Monday, November 27, 2017 after a extended illness. A native of Memphis, Tenn., he was born April 9, 1941 to Anthony and Josephine Sansone. He was a devoted father and grandfather... View Obituary & Service Information

The family of Anthony "Tony" Sansone created this Life Tributes page to make it easy to share your memories.

Send flowers to the Sansone family.