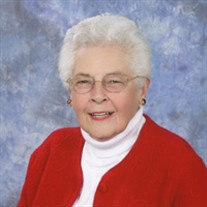 ANNIE LAURIE ALLEN ARNOLD   Tupelo - Annie Laurie Allen Arnold, 95, died Thursday, August 17, 2017 at Sanctuary Hospice House. Annie Laurie was born in Baldwyn, Mississippi on September 1, 1921, the child of Frances and Howard Walker. She became a Christian at the age of eight. While in Baldwyn High School, she worked as a secretary to the school Superintendent, as well as, to the pastor of First Baptist Church.   Before age 18, she got a clerical job in the General Accounting Offices in Washington D.C., where she attended school at night in an effort to polish her secretarial skills. She hoped to get a better job and attend college in D.C., but plans changed.   She married Sam H. Allen, Jr. on August 18, 1940 in Des Moines, Iowa. They moved to Portland, Oregon where daughter, Carol, was born. After some years, they moved back to Mississippi and lived in Tupelo for 50 years. Sam H. Allen, III was born in Tupelo.   A devoted Baptist, she served on almost every committee (open to women) at Calvary Baptist Church and taught Sunday school through the years from nursery to the oldest members. In the mean time, she served as a cub scout and girl scout leader as her children grew. She worked in the ministry to the deaf and taught sign language.   She was a member of the Peripatetic Club for 72 years and participated in the Lee Co. Library Lunching with Books. Her "lunch bunch", a group of ten ladies, met once a month for many years, up until June, to try out Tupelo's restaurants.   She and husband, Sam, enjoyed playing bridge and traveling. In her latter years, she traveled on missions trips to Central America (Honduras and Costa Rica) and to Israel, Jordan, Greece, England and France, to Alaska and Hawaii and to China. Best of all, she visited every one of the 50 United States.   In 1989, she married Johnnie "J.R." Arnold and traveled by camper extensively on hunting and fishing trips. Actually, she experienced lots of camping with both husbands into some very wild places.   Survivors include her daughter; Carol Elizabeth Allen; step-daughter, Mary Nell Garner (Jim); daughter-in-law, Carol Bryson Allen; step-daughter-in-law, Betty Arnold; grandchildren, Melinda Foster (Brad), Jennifer Kuhn (Tim), Rebecca Jones (Matthew), Kimberly Mains (John Paul), Kelli Moore (Brad), Hollie Saltis (Tony) and James Kent Garner; great-grandchildren, Kelsey, Trula and Juniper Foster, Abigail, Emma and Brice Kuhn, Amelia Jones, Kayla, Emily and Mackensie Mains, Matthew, Andrew and Joel Moore and Aiden and Mary Elise Garner; special friend, Vickie Moore.   She was preceded in death by her parents; first husband, Sam H. Allen, Jr; second husband, J. R. Arnold; son, Sam H. Allen, III and step-son, John Robert Arnold.   Visitation will be from 5 until 7 p.m. Sunday, August 20, 2017 at W. E. Pegues, Tupelo. Services will be 10 a.m. Monday, August 21, 2017 at Calvary Baptist Church with Rev. Stanley Huddleston, Rev. Chris DeGeorge and Father Donald Brice officiating. Graveside services will follow in Lee Memorial Park.   Pallbearers will be Kent Garner, Brad Foster, Tim Kuhn, Dr. Matthew Jones, Kyle Walker and Mike Walker.   Honorary pallbearers will be members of the Peripatetic Club and her "lunch bunch" friends, Joyce Beasley and Jeanette Larrimore.   A special thanks to the caring staff at Traceway Retirement Center, in both Cedars and the Mitchell Center and to Sanctuary Hospice House.   Memorials may be made in her honor to French Camp Academy, Traceway Retirement Center, Sanctuary Hospice or the church of your choice.   Expressions of sympathy may be made at www.peguesfuneralhome.com.

The family of Annie Laurie Allen Arnold created this Life Tributes page to make it easy to share your memories.