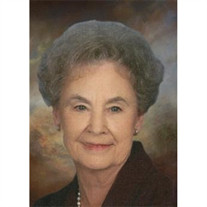 Anna Bell Atkins   Tupelo- Anna Bell Atkins, 87, passed away, January 14, 2017, at Traceway Retirement Center. She was born on May 5, 1929, in Lee County, to Guy and Jessie Mae Morgan. She enjoyed sewing, quilting and cooking for her family.... View Obituary & Service Information

The family of Anna Bell Atkins created this Life Tributes page to make it easy to share your memories.

Send flowers to the Atkins family.