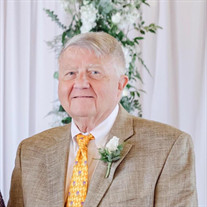 Andy Paul Lawhon passed away September 22, 2021, at North Mississippi Medical Center at the age of 77. A Tupelo native and lifelong resident, Andy was born October 9, 1943, the son of Lt. Andrew Ferrell Lawhon USMC and Geraldine Franks Lawhon Sheffield. Andy’s most fond memories of childhood were days spent on Lawhon farm with cousins & friends and being a part of Paul Eason’s Boy Scout Troup 12 where he had the privilege of attending five National Boy Scout Jamborees. His teenage years were spent life guarding at the Tupelo City Pool & working at Tupelo City Hall for his Grandfather Tracy Franks/Tupelo City Clerk. After graduating Tupelo High School, Andy earned his Bachelors Degree from the University of Mississippi where he was a proud member of the Sigma Nu Fraternity. His first job was working for Mid South Packers as an accountant, a job that provided Andy with many interesting experiences. Andy, along with his parents built and operated the Senter Street Skating Rink and the Circus Skate Center where good times were had by all. Andy joined his step-father, JV Sheffield in the insurance business in the 1970’s and remained in the insurance business for most of his life. In 1996, Andy became director Promise Keepers for the state of Mississippi. Promise Keepers proved to be the most fulfilling work in Andy’s life. This Christian Men’s Ministry encouraged & equipped men to be the spiritual leader of the home, promote racial reconciliation and follow Jesus. Andy was a faithful member and past Elder of Hope Church. Andy leaves behind the love of his live, Barbara Caldwell Lawhon who he married on January 24, 1964, two daughters, Leslie Hobson and husband, Blake of Tupelo and Casey Lawhon of Verona; three grandchildren, Luke Hobson, Kyle Hobson & Shelby Hobson all of Tupelo; two brothers, Bob Sheffield and wife Marilyn, of Winter Haven, Florida and Mike Sheffield and wife, Angie. He was proceeded in death by his parents; his step-father, JV Sheffield; and a brother Johnny Sheffield. A graveside service honoring Andy’s life will be held at 2:00pm Saturday at Lee Memorial Park with Rev. Scooter Noland and Tim Lampley officiating. W. E. Pegues Funeral Directors is entrusted with the arrangements. Memorials may be mad to the Men’s Ministry of Hope Church, 2094 McCullough Blvd., Tupelo, MS 38801 Expressions of sympathy and fond memories may be shard at www.peguesfuneralhome.com

The family of Andy Lawhon created this Life Tributes page to make it easy to share your memories.

Send flowers to the Lawhon family.