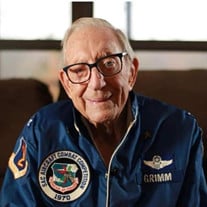 Alfred R. Grimm, USAF Colonel, Retired Tupelo- Alfred Ray Grimm (Al), a devoted husband, father, grandfather, and great-grandfather died Wednesday, March 17, 2021 at the age of 99 in his home in Tupelo, Mississippi. Al was born in Hartville, Ohio on May 25, 1921 to Alfred R. Grimm, Sr. and Osa Posey Grimm. After marrying Mary Lou Schumacher and attending Miami University in Oxford, Ohio, Al joined the United States Army Air Corps in 1944. Following his flight training that began in the PT-19, PT-13, and PT-15 planes, he advanced to the B-17 bomber. During his impressive military career he was a World War II B-17 Bomber Pilot and B-52 Wing Commander. Like many men who served in WWII on B-17s, Al was assigned to the revered 401st Bombardment Group in Deenethorpe, England. After an accomplished 35 years in the military, he retired in 1971 as a United States Air Force Colonel. After his retirement, Al devoted his time to Christian ministries in the greater Phoenix, Arizona area, including Campus Crusade for Christ, serving as a board member of the Law Enforcement Ministries, and teaching Bible studies for the police department. He is survived by his son, Alfred R. Grimm III and his wife, Sandy of Tupelo; granddaughter, Jennifer Cannon and her husband, Gino; grandson, Alfred R. Grimm IV and his wife, Hilary; great-grandchildren, Emily Clement, Karigan Cannon, Chad Cannon, Jenna Faith Cannon, Andrew Grimm, Lucas Grimm, and Genevieve Grimm. Al was preceded in death by his beloved wife, Mary Lou Grimm; son, Carl Grimm; parents; and six sisters. A graveside service with Military Honors will be held in Arlington National Cemetery at a later date. Expressions of sympathy may be left at www.peguesfuneralhome.com.

The family of Alfred R. Grimm, USAF Colonel, Retired created this Life Tributes page to make it easy to share your memories.