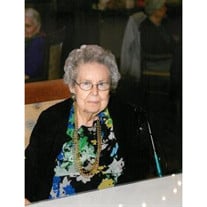 Alene Johnson Dabbs Tupelo - Mrs. Alene Johnson Dabs was born June 16, 1922, to John H. Johnson and Eva Sexton Johnson in Tippah County, Mississippi. She departed this life on October 9, 2016. Mrs. Dabbs graduated from Chalybeate High School. She was always an outstanding student. During her senior year in High School, she received the DAR Award, which recognized scholarship, character, service and leadership. She graduated from Blue Mountain College with degrees in Bible and English. During her summers while in college, she worked on the staff at the Baptist Assembly in Ridgecrest, North Carolina the native state of her father. After graduation from college, she taught 8th grade for one year. She accepted a position with the Mississippi Baptist Convention Board Training Department. She taught Study Courses and Bible Schools all over the state of Mississippi. Later, she was employed by the Mississippi State Welfare Department. She returned to graduate school at Louisiana State University and earned a Masters Degree in Social Welfare. Her next years were spent working with families and children in foster care as well as adoptive homes. She worked with handicapped children in a medical setting. In 1970, she married David Prude Dabbs, who was a sanitation supervisor for the Mississippi Department of Health. He assisted her in evaluating foster and adoptive homes. One of her fondest memories was of sitting in the white swing on the Dabbs home porch in Shannon, listening to Dr. R. G. Dabbs tell story after story of how he ministered to the medical needs of families in Lee County. During his practice times, the medical facilities were limited to one small hospital in Tupelo. Mrs. Dabbs attended seven Baptist Churches during her lifetime. She was active in all phases of church work. She taught Sunday School (children as well as adults), was active in Women's Missionary Union, and was an active participant in Vacation Bible School. She was in charge of "Mission Emphasis" at Vacation Bible School at First Baptist Church Shannon when she was nearing 80 years of age. She and her husband contributed greatly to the D. P. Dabbs Family Life Center at the First Baptist Church of Shannon. She was a member of Bissell Baptist Church. Mrs. Dabbs was active in Shannon Woman's Club. She served as president of the Tupelo Pilot Club. In 1972 - 1973, she was recognized by Who's Who in America for her work with children. Her greatest joy and fondest memory was the smiles of many children she helped. She loved the Lord, her family, and people less fortunate than herself. She found many ways to help people in need. She loved animals and pets. When she lived in Shannon, she had several pet dogs. She was a supporter of the Humane Society. She loved politics, being active and informed in all elections. She enjoyed her travels to the Holy Land and Greece and particularly loved taking Communion at the Tomb in the Holy Land. She spent the last part of her retirement years at Traceway Manor, where she participated in all daily activities, such as Bible study and worship. She loved everyone there and all the staff who cared for her so well. She is survived by her two brothers, John C. Johnson (Hortense) of West Point, Walter Johnson of New Albany; niece, Jan Johnson Provenza of New Albany; nephew, John Johnson (Susan) of Shannon;  three great nephews, Morgan Johnson (Kellie) of Shannon, Jake Johnson (Katy) of Memphis, Tennessee and Troy Neal Johnson of Shannon; and special friends, Colita and Sonny Corder of Tupelo. She was preceded in death by her husband, David P. Dabbs; parents, Mr. and Mrs. John H. Johnson; and brother, James Ray Johnson. Services will be held 11 a.m. Wednesday, October 12, 2016, at W. E. Pegues with Rev. Mark Cayson and Bro. Roger Smith officiating. A graveside service will follow at the Shannon Cemetery on the Dabbs family plot. Visitation will be from 4 p.m. until 7 p.m. Tuesday, October 11, 2016, at W. E. Pegues, Tupelo. Pallbearers will be John Moore Johnson, Jerry Mancil and Sonny Corder. Honorary pallbearers will be Jake Johnson, Morgan Johnson and Troy Neil Johnson. Memorials may be made to Bissell Baptist Church, 4662 West Main Street, Tupelo, Mississippi 38801, or to the Lee Humane Society, 2400 South Gloster Street, Tupelo, Mississippi 38801. Expressions of sympathy may be left at www.peguesfuneralhome.com.

The family of Alene Johnson Dabbs created this Life Tributes page to make it easy to share your memories.

Send flowers to the Dabbs family.