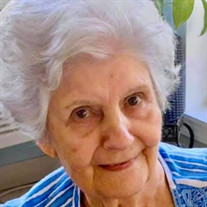 Belden- Agnes Parks Tate died Tuesday, July 20, 2021, at the age of 95 at Pontotoc Health and Rehab. She was born in Lee County, Mississippi, on July 31, 1925, to Otis and Georgia Lansdell Parks. Agnes was one of eight siblings, which solidified a strong foundation for a family-oriented life, filled with nieces, nephews, cousins, and extended family whom she loved and cherished. She also always loved her husband's family as her own. Agnes graduated from Sherman High School in 1947. According to legend, she shined on her high school’s girls’ basketball team. On September 28, 1949, Agnes wed Byron G. Tate and was married 62 years before he passed away on April 28, 2011. At the beginning of their marriage in December of 1950, they moved to Memphis, Tennessee where Byron began work at the Memphis Defense Depot. After 33 years of service, he retired and they returned to their roots in northeast Mississippi to begin their last phase of married life. Agnes loved spending time in her kitchen creating meals for her family. She devoted her time to her family and enjoyed her role as caregiver. Her many interests included gardening, sewing, and cooking. Her family would agree that she showed her love for you by cooking your favorite meal. In addition to being committed to family, Agnes loved serving her Lord. When her husband became an ordained Deacon in the 1960s, serving several terms as chairman of Deacons at both Kensington Baptist Church in Memphis and Sherman Baptist Church in Sherman, Agnes faithfully supported her husband in this important role. They both taught Sunday School for many years. Agnes especially had a heart for the elderly who were unable to attend church services. Countless hours were spent visiting with shut-ins in the community and sharing recorded tapes of the previous week’s church service. During the last years of her life, Agnes and Byron were members of Belden Baptist Church. Agnes is survived by her daughter, Patrice Tate; granddaughter, Amy Tate (Rodney Brown); grandson, Jonathan Tate (Ashley) all of Belden; former daughter-in-law, LeAnne Tate May (Mark May) of Olive Branch; great-granddaughters, Lauren Tate Watts (Nate), Gracie and Greta Tate; great-grandsons, Gavin and Greyson Tate; and great-great-granddaughters, Ivy and Mazie. She was blessed to have in her life bonus great- grandchildren, Logan, Madison, and Kelsey. In addition, she is survived by sisters-in-laws, Joyce Parks, Katherine Parks and Irene Parks, along with many nieces, nephews, and cousins. She was preceded in death by her beloved son, Terry Craig Tate, whom she cherished; and great-grandson, Preston Byron Tate. Additionally, she was preceded in death by four brothers, William “Buddy” Parks, Harold Parks, Johnny Parks (Olene) and Gerald Parks and three sisters, Opal Sanders Ray (Delma), Dorothy Chapman (Cliff) and Dolly Chapman (Leonard). Visitation will be 1 p.m. until service time Sunday, July 25, 2021, at W. E. Pegues, Tupelo. A celebration of Agnes’ life will be 3 p.m. Sunday July 25, 2021 at the Jefferson Street Chapel of W. E Pegues with longtime family friend, Rev. Danny Armstrong, officiating. Burial will follow at Pontotoc Memorial Gardens. The family kindly ask all guest wear mask during all funeral services and visitation. The service will be live streamed and recorded for those who may not be able to attend at www.peguesfuneralhome.com. Pallbearers will be Jonathan Byron Tate, Danny Tate, Jimmy Tate, David Parks, Terry Hunt, and Gary Campbell. Honorary pallbearers will be Jeff Parks and great-grandsons, Gavin and Greyson Tate. In lieu of flowers, memorials may be made to St. Jude’s Children’s Research Hospital, 501 St. Jude Place, Memphis, TN 38105. Expressions of sympathy and fond memories may be left at www.peguesfuneralhome.com.

Belden- Agnes Parks Tate died Tuesday, July 20, 2021, at the age of 95 at Pontotoc Health and Rehab. She was born in Lee County, Mississippi, on July 31, 1925, to Otis and Georgia Lansdell Parks. Agnes was one of eight siblings, which solidified... View Obituary & Service Information

The family of Agnes Parks Tate created this Life Tributes page to make it easy to share your memories.

Send flowers to the Tate family.